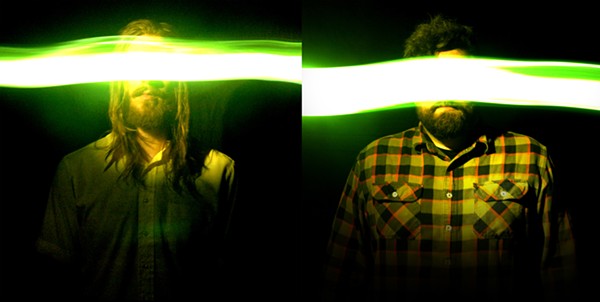 Courtesy of Automatic Weapons
There’s nothing like a record to capture musicians’ senses of artistic growth. It remains a near-perfect medium for bands interested in sharing their talents with an audience. For new bands with something fresh and unclaimed to prove, it’s even more vital.

We’re talking about Automatic Weapons here, which has made a splash in the local music scene without so much as a opening slot at the corner bar.

The multi-instrumentalist duo — Vinny DiFranco and Michael Bashur — hail from Ohio Sky, which scorched Northeast Ohio with an ethereal blend of heavy riffs and soaring soundscapes for about a decade. As that band’s activities fizzled, the two musicians took their downtime jamming into more defined direction.

“We originally came up with the idea just to produce music between the two of us with no real thought of performing,” Bashur says. “We just wanted to layer sounds and just make the kind of music we wanted to listen to.”

The first EP and much of the band’s latest release, Young Lovers/Dystopian Future, stems from lengthy sound experiments at a home studio in Gates Mills. Surrounded by guitars, cameras and a warm, wooden ambiance, the guys ran sounds through an old Hammond Auto-Vari analog drum machine. What came out on the other end were polyrhythmic backbones that formed the genesis of this new material.

Take “Antenna,” for instance, a neat single that features snappy percussion fills around DiFranco’s verses. That Auto-Vari sound is stitched throughout the album, lending a real sense of coherence to the piece.

“We wrote the first four pieces heavily reliant on that [drum machine],” DiFranco says, “and then we made sure it kinda danced in and out of the record as we got toward the end. We were just really, really happy with it. It was a very peculiar sound. That’s where it started.”


And the organic nature of those early jams is evident across the LP. There are elements of Ohio Sky riddled throughout the Automatic Weapons sound, of course, but it’s easy to feel a freshness between each note, a relaxed enjoyment that accompanies the occasional head-banging flash of danger.

That dichotomy goes ever deeper: The title of this new album is indeed a nod to its two sides. With the first half of the album, there’s a youthful feeling. There’s hope. “Interlude” into “The Foothills” is a particularly beautiful sequence. It’s worthwhile to zoom in on this, briefly, because “Interlude” sees the guys spawning an earthy, bucolic melody right on the spot in Ben Schigel’s Spider Studios in Olmsted Falls. (Much of the rest of the album was pre-produced at the Gates Mills spot.)

“With ‘Interlude’ and a couple other tunes, we actually just went to the studio thinking, ‘We’re just gonna hang out here for the day,’ which is the most fun,” Bashur says.

“The Foothills,” then, builds on that textural plane and reasserts DiFranco’s vocals atop a gently nodding beat. It’s in tunes like that (and elsewhere) that we can all confirm how much DiFranco has grown as a singer. This is a frequently a contemplative album, and he underscores that mood with both lyrics and vocal inflection.

As the record bleeds into Side B, though, a serious sense of foreboding takes root. The word “dystopian” is difficult to shake as listeners fall down the well.

“Cloudburst Burnt Forest” is an eerie example: A Radioheadish beat gives way to feelings of despair, dissolution. The back half of this tune brings the minor key into a full-on arena-rock guitar solo. From there, the album descends into its denouement, a panic attack titled, simply, “Outro.”

On that final tune, DiFranco whispers “Breathe” into the mic over and over. The word swirls around the song’s heartbeat, and then explodes into a cataclysmic curtain call.

“That song is rigged with anxiety. It came in a flash one night,” DiFranco says. “It was this weird culmination of all this shit that had happened up until that point, all getting squeezed into one little bubble of anxiety. I don’t listen to that song when I listen to the record too often, to tell you the truth. It’s a lot.”

All of that — the moods, the sounds — come packaged in large part by the handiwork of producer Ben Schigel, the former singer of Switched who’s worked with DiFranco and Bashur before and who’s left his fingerprints on an untold number of Cleveland rock bands over the years. The guys in Automatic Weapons heaped praise on his touch, which is evident, DiFranco says, in every syllable sung into the mic.

“When we got to this project, we wanted to sit back and let go — really let him offer up as much as he could,” DiFranco says. “He became an unbelievably instrumental part of the recording process.”

And through that process, DiFranco and Bashur worked in tandem and in ways that seemed effortless to the both of them. They built off each other’s foundations, and rarely found themselves landing in a place that one or the other wasn’t feeling. Whatever lessons they learned as members of Ohio — collaboration, compromise — crystallized with ease as Automatic Weapons.

“This was just about Mike and myself,” DiFranco says. “One of the important things to us was: Let’s treat the songwriting process and the recording process as our wildest dreams. What is it that we wouldn’t have done in the past because of limitations? … [We decided to] take things over the edge and do too much — and then pull back.”

Schigel got them across the finish line with his years of experience — both at the tracking board and within the Cleveland music scene in general.

As for the live arrangements that will be on display this Friday at Beachland Tavern, the guys initially paid no heed to how these songs would translate to the stage. That all changed, of course, and they’re now prepping their first show as Automatic Weapons. A lot of the material from the album can be performed onstage, they said, with certain tracks being cued up digitally and with a drummer (Matt Danko) joining them. But because they left things on such an experimental plane in the studio, they’re able to reinterpret their own songs in small and interesting ways.

Consider it a Cleveland Christmas present to all who’ve been listening this year.