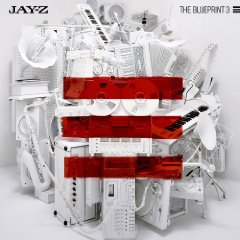 Invulnerability is the pot of gold at the end of hip-hop's proverbial rainbow, the brass ring every rising MC aspires to seize. Jay-Z's had it for the better part of the decade: consistent album sales, unimpeachable crossover appeal, a decent-if-unspectacular run as president of Def Jam, marriage to modern R&B's flyest multimedia diva, and fashion bona fides by way of Rocawear and special-edition Nikes.

Since 2002's The Blueprint 2, dispatches from Hovito's penthouse have scanned as victory-lap variations, affirmations of Shawn Carter's cultural and financial dominance, the monied musings of a rap don intent on keeping his legend alive and vital in a marketplace flooded by mixtape-slinging whippersnappers and biters.

The Blueprint 3's song titles begin making their case before you can even crack the shrink-wrap. "Thank You" establishes a swank, Vegas issuance that harkens back to 2007's American Gangster both in tone and in terms of ad-libs before Jay-Z snaps into an elaborate 9/11 riff that demonstrates why he's king: "Not only did they brick, they put a building up as well/They ran a plane into that building, and when that building fell/Ran to the crash site with no masks, and inhailed/Toxins deep into they lungs until both of them was felled."

On "Hate," Jay and Kanye West trade the mike in haughty, needle-sharp disgust, while "Off That" finds Hova breathing new, nimble life into the ahead-of-his-time song with Renaissance new jack Drake. Throughout, Jay sounds relaxed, revitalized, even hungry; wide-ranging, forward-thinking beats from his usual stable of top-shelf producers
amplify all the frankly reiterative fun he's having here. —Ray Cummings