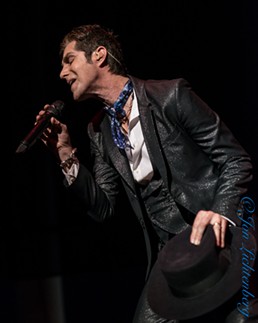 Jon Lichtenberg
Jane's Addiction's Perry Farrell
When Jane's Addiction, Dinosaur Jr. and Living Colour, all of whom shared the stage last night at Jacobs Pavilion at Nautica, formed way back in the mid-’80s, hair metal and classic rock still ruled commercial radio. Anything punk or post-punk stood little chance of finding its way onto commercial radio or into mainstream rock venues.

In their own unique ways, these three acts introduced the concept of alternative or modern rock. While each band has struggled in the wake of the success it achieved in the '80s and '90s, all three still have vital live shows, something they put on display last night before a near-capacity crowd.

During its 90-minute set, Jane’s Addiction revisited its second studio album, 1990’s Ritual de lo habitual, which it played in its entirety. The concert’s opening even began with the Spanish spoken word intro found on the studio album. That prerecorded snippet led into “Stop!” the album’s driving first song.

Dressed in a shimmering three-piece suit, singer Perry Farrell writhed and slid across the stage as scantily clad dancers busted out stripper dance moves on a catwalk at the rear of the stage. Jane’s Addiction has always celebrated decadence. Though tamer from the shows the band delivered back in the day when a dreadlocked Farrell would crank up the vocal distortion to the point that it seemed like some kind of psychological torture, this performance indulged in the sensual and even found Farrell simulating sex with a dancer at one point. At another point, dancers attached hooks to their backs and hung suspended over the audience.

Particularly sensitive to good vibes, Farrell reveled in congratulating fans on the recent NBA championship. “This town — there’s been a change around here,” he said one point, alluding to the city’s first national championship in more than 50 years. His connection with the crowd seemed to fuel the performance, and songs such as “Ain’t No Right,” a tune driven by Stephen Perkins’ relentless drumming, and “Mountain Song,” a track that kicked off with a thick bass riff before Farrell’s fierce vocals took over, both soared despite a sound mix that buried the vocals and often turned the songs into sludge. “Jane Says,” which the band played in the encore, had all the brittleness of the studio version and even featured a bit of steel drums.

Living Colour started the night off with an aggressive set that concluded with the band’s big hit, “Cult of Personality.” Enthusiastic singer Corey Glover made his way into the bleachers to sing the tune’s final lines while the band capably jammed. Guitarist Vernon Reid, in particular, remains a phenomenal player. The band received such a positive response from fans that you got the sense that had there been time, the group could have played an encore.

In singer-guitarist J. Mascis, Dinosaur Jr. has a guitar hero its own. With his long white hair, Mascis looked like a wizard from Lord of the Rings, but he sure can shred. Much like Neil Young, he let distortion and feedback have their way as he delivered one gritty riff after another. On occasion, he reigned it in — the ballad “Back to Your Heart” featured his tempered vocals and suggested a sensitivity behind the wall of noise that the trio produced. A cover of the Cure’s “Just Like Heaven,” which the band delivered under soft purple and red lights, also spoke to the group’s softer side and came off particularly well.