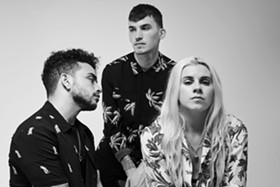 Brandon Taelor Aviram
Currently touring Europe in support of its new album, All We Know of Heaven, All We Need of Hell, the indie rock act PVRIS has just announced dates for a 2018 North American tour.

It will perform on Feb. 23 at House of Blues.

Tickets to the House of Blues show go on sale at 10 a.m. on Friday.