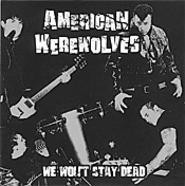 Deeply indebted to horrorcore legends the Misfits, American Werewolves plays atomic-powered '50s-style pop at punk speed. (Fiends who have been bitterly disappointed with recent efforts from the Misfits pantheon note that . . . We Won't Stay Dead is stronger than Project 1950 and everything from 'Fits friends Balzac.)

Structured around choruses that consist of variations on "whoa-ooa," hook-dense songs such as "Teenage Ghouls Out for Blood" and "I Drink Your Blood" are built for a live show. The Wolves' debut LP is as listenable as it is dark, with 13 songs that are progressively heavier, faster, tighter, and more menacing. The band puts a distinct stamp on the homage by adding creepy-crawly B-movie organs and creaking guitars over Tony Scamboney's hardscrabble bass and Trevor Moment's violent crooning. In later tracks such as "Monster Movie," the music morphs into hardcore, with Moment growling, "Tonight, we're gonna get our kicks/ Tonight, just like the horror flicks." It's a scary-good time.