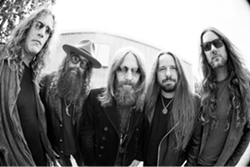 Some critics have said the song expresses an anti-Trump sentiment, but singer-guitarist Charlie Starr disagrees.

“Lyrically, it’s just an observation about how scary the world is,” says Starr, who brings the band to House of Blues on Dec. 28. He spoke via phone from his Atlanta home as he was doing some Christmas shopping. “From time to time, it hits home with me more than ever. The world has been always been scary and now our lives are inundated with it. Everyone makes jokes about 2016 being the year of all years. There’s a little bit of an armageddon warning to it. Somebody asked me if it was a protest song, and I said it was as close to a protest song as I’ll ever write. It’s not about Donald Trump. It’s about whoever might wind up with that job. Good luck with that.”


Starr says he has difficulty writing new tunes while he’s on tour. Given that the group tours relentlessly, that means that he seldom has time to write. But when he sat down and started to pen some songs for Like an Arrow last year, they came out quickly.

“I looked down at one point when I was making demos, and I had 15 or 16 songs,” he says. “It felt really good. We started rehearsing the new songs, and they felt really good immediately. There was a lot of smiling going on in the room, so I knew we were heading in the right direction.”

Since the guys didn't tour for the entire month of January, they booked some time in a studio close to their Atlanta home. They initially planned to write some demos. Those demos turned out so well, they became the songs that make up the album.

“I wasn’t exactly sure we were making a record until we started to record,” says Starr. “We didn’t call a producer. It became clear to everyone involved that we were making a good record. We produced it as it went along. Before we knew it, we were done. It took a month. That’s the way it should be. Records shouldn’t take a year or two to make.”

He says the Quarry Recording Studio provided the band with the perfect environment to get the raw sound it loves.

“It’s got a big tracking room which we utilized,” he says. “We put amps in the room to get a nice, natural bleed. It’s funny how far we’ve come throughout the decades. In the early days at Sun Studios, they worked with what they had and got mic bleed. It’s not necessarily what they wanted. In the ’70s and ’80s, we tried to isolate everything. Now we want to put all the amps in the same room and get noisy again.

The track “Sunrise in Texas” possesses the kind of swagger that’s typical of the best Southern rock of the ’70s. Think “Free Bird” or the Marshall Tucker Band’s “Can’t You See.” Starr says the band has played various incarnations of the tune for years.

“Before we formed Blackberry Smoke, we backed up a singer named Michael Tolcher,” says Starr. “On the initial version of that song, he was a troubadour. We played it with him and it was really cool. A coupe of years after we made our first record, we started playing it again, and I rewrote some lyrics so that it took on a different meaning for me. Over the years, it’s become a fan favorite and then we would forget about it and it would lie there and get dusty. Fans keep asking us about putting it on a record, so we finally did. It fit well.”

“When we started to record that song, it had a Macon, Georgia/ Capricorn Records vibe,” says Starr. “Over time, we’ve played his festivals and spent time with him over the years. We just said it would be great if he could sing it for us, and he did.”

Produced by Brendan O'Brien (AC/DC, Aerosmith, Pearl Jam, Bruce Springsteen and Neil Young), last year’s hard rocking Holding All the Roses shows off the band’s heavier side. It commences with “Let Me Help You Find the Door,” a swaggering mid-tempo rock tune that sounds like a cross between Tom Petty and Aerosmith.

Starr says the band didn’t necessarily intend the album to be a departure from 2013's The Whippoorwill, but it is. That album’s fast-paced title track is a rollicking tune that features a bit of fiddle that’s hidden until a mid-song segment that features a twangy fiddle solo courtesy of guest Ann Marie Simpson that then gives way to a searing guitar riffs. It’s a real juxtaposition of sounds, but it works.

Dipping into different genres is something that Starr, who grew up in the Atlanta area, has done ever since he first picked up a guitar when he was a kid. His father and grandmother were very religious, and he developed an appreciation for gospel music from them.

“I had to play the guitar — I just had to,” he says when asked about his upbringing. “From as far back as I can remember, I wanted to play. I got that feeling from when I was four years old or from whenever your brain starts to process memories. [My father] would tell me not to touch it. I couldn’t wait to start writing songs on it. It’s from watching him do it. I was just entranced. I remember learning these country-type songs and learning the cowboy chords. I was getting ready for school one morning, and my mom was listening to the Stones, like she did every morning. ‘Honky Tonk Women’ came on, and it clicked. I realized it was the same thing as the country songs I learned from my dad. It has that beautiful chorus and harmony. They understand what I understand. I was about 11, and that put me on the path.”

At first, Starr just focused on playing guitar. But after working with more than one singer who couldn't really cut it, Starr figured it was time to take over as frontman. The band put out its debut in 2003. It followed it up in 2004 with another album but, according to Starr, the group became involved in "two different label disasters." During that time, the band continued to tour and play new songs every night.

While on a Lynyrd Skynyrd-hosted cruise in the mid-2000s, Starr met up-and-coming singer-songwriter Zac Brown, who subsequently signed the group to its now defunct Southern Ground label. When it came time to record its debut for Zac Brown's label, the band kicked out 17 songs in five days. Released in 2013, the resulting album, The Whippoorwill, is a great collection of Southern rock-inspired tunes that show off Starr's consummate songwriting chops and established the band on a national scale.

The group's subsequently been dubbed "the new face of blue-collar Southern rock" — something that sits well with Starr, though he bristles at the suggestion that he's somehow revived Southern rock.

“People say it a lot that we’re reviving Southern rock or carrying the torch and that’s great,” he says. “We never tried to be the second coming of Lynyrd Skynyrd. They’re still here, after all. We’re just five guys from the South making music. If it reminds people of Skynyrd or Allmans, that’s good because it reminds them of good music. We want to make music we love and enjoy and respect. It would be silly if we tried to be a punk band. We play what feels right to us. We’re not a nostalgia show. We just want to play and sing as best we can.”