An Overview of All the 2016 Releases You Might've Missed 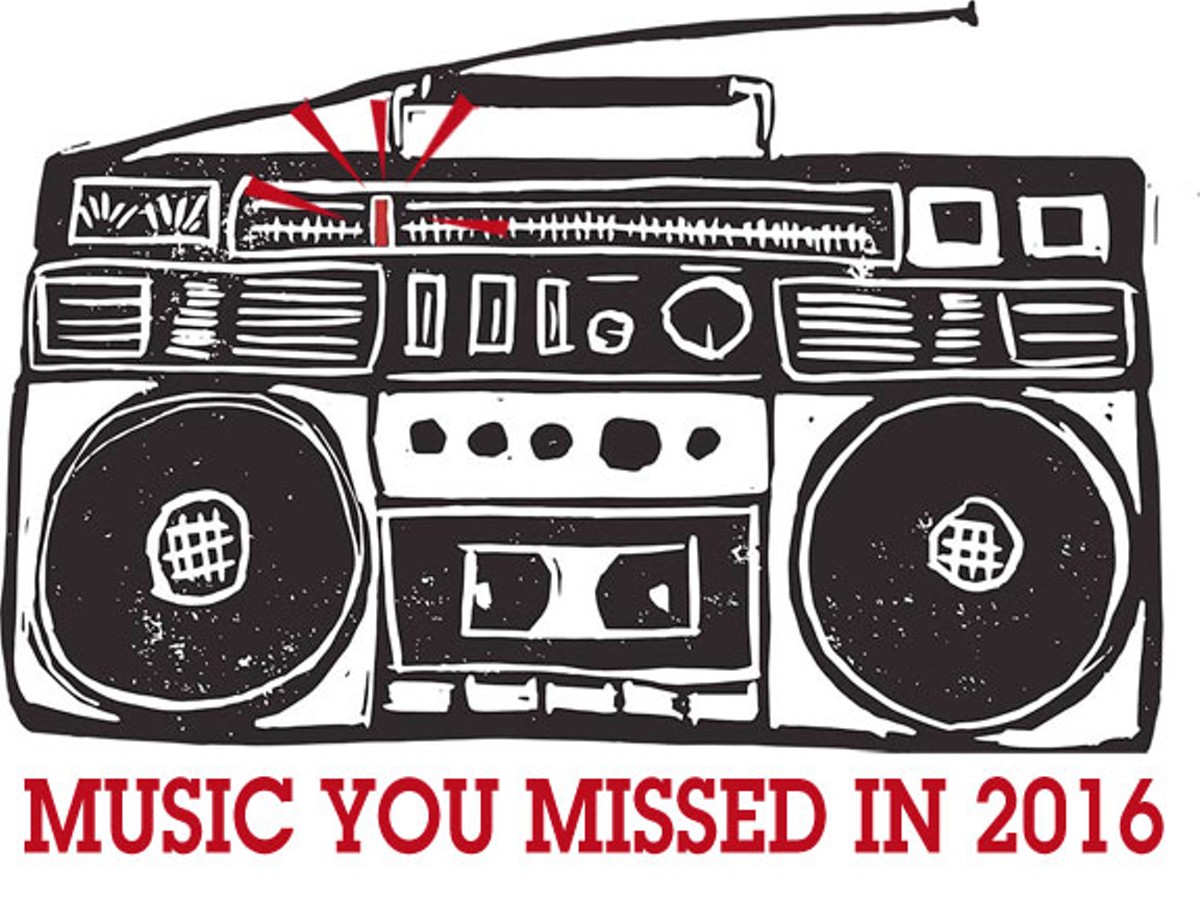 About this time of year, arts and culture rags tend to deliver their takes on the year's 10 best albums/books/movies. Most lists read roughly the same. If Radiohead put out an album that year, you know it's gonna be on everyone's list. The same goes for whatever socially conscious rapper issued a new release.

Often, however, some of the year's best releases don't appear on the typical top ten list. We consulted a few local college radio DJs to find out what great albums came out this year that you might've missed. Here's what they came up with.

Andrew Bird's signature whistling, saw-playing, multi-layered vocals and guitar-string-plucking are prevalent throughout his latest release, but they're lightened and livened by the most upbeat and poppy production we've yet heard from him. Bird is a prolific musician who explores with genre and style, but here he seems happier, and more settled; the result is a more effusively sentimental album. Hints of romance abound in "Are you Serious" and "Bellevue." Even "Left-handed Kisses," a slightly twisted love song duet with Fiona Apple, is sweet. This album probably thrills fans of Andrew Bird; for those who aren't as familiar with his work, Are You Serious is a great place to start. (Genevieve Mathieson)

On this third solo album produced by David Longstreth of the Dirty Projectors, Bombino demonstrates an apparently effortless virtuosity with the guitar. Accompanied by a group of percussionists and backup vocalists, Bombino, a Tuareg musician from Niger, performs entirely in Tamashek, singing about politics and current events while weaving a compelling melody. Azel features the kind of rocking guitar and drums that — in a live setting — gets the audience up on its feet for non-stop dancing. A balance of impressive guitar, crisp, raw vocals and hints of reggae combine to form this perfect example of desert blues. (Mathieson)

9Bach, a Welsh neo-folk band, has several albums out on the Real World record label. This newest album features electronica-tinged, trip-hoppy versions of traditional Welsh folk and original songs. Lisa Jên's lovely, multilayered, ethereal vocals are balanced by occasional piano, guitar, harp, and drums throughout the album. "Anian" in Welsh means "nature," both of the world and human, and the light melodic sound belies the heavy emotional themes that drive the album. A companion disc offers English-language poems and spoken word pieces from various artists that interpret, explain or respond to the Welsh songs on the first disc. The second disc offers an interesting counterpoint to the obscure but beautiful songs on the first disc. (Mathieson)

The Silver Lake Chorus, a 24-member choral group based in L.A., has put out two albums in the last two years that feature original songs from artists such as Sia, Aimee Mann, Carl Newman (New Pornographers) and Wayne Coyne (The Flaming Lips). This album moves smoothly from song to song, blending tempo and tone in a way that engages the listener through the whole album. For those who prefer to dip in and pick just one or two tracks at a time, standout songs include "Break it Down (Lovett remix)," "Easy to Die (Hammock Remix)" and "Heavy Star Moving (starRo Remix)." It's rare for a remix album to compare well to its source material, but this one does. (Mathieson)

From "Quiet Corners and Empty Spaces" through "I'll Be Your Key," the Jayhawks' Paging Mr. Proust weaves poignant silence through melodic chaos, taking the listener on a journey through the autumnal musings of 1992's Hollywood Town Hall to the sonic explorations of 1997's Sound of Lies, which front-man Gary Louris and company revived on tour prior to this highly anticipated 2016 studio release. Louris and original members Tim O'Reagan, Marc Perlman and Karen Grotberg team up with producers Tucker Martine and Peter Buck for one of the Minnesota outfit's most glittering and literate efforts yet. Highlights: "Lover of the Sun," "Devil is In Her Eyes," "Isabel's Daughter." (Emma Sleva)

Poised on the ledge of sweetness, Teddy Thompson and Kelly Jones never falter into the saccharine on this year's Little Windows. Approaching originals with the tongue-in-cheek charisma of Dolly and Porter and the earnest harmonies of Phil and Don Everly, Thompson's Chet Atkins-style guitar and the duo's pristine vocals refuse to gloss over the history behind them, discarding the requisite irony of trendy "throwback" duos (à la She & Him) and instead imbuing the record with their own histories — Thompson is the son of English folk-rock pioneers Linda and Richard Thompson. Past meets present and unwraps '50s pop for a new generation on Little Windows. See: "You Can't Call Me Baby" and "Never Knew You Loved Me Too." (Emma Sleva)

Overturning Nashville's latter day pop to unearth echoes of the Carter Family's Bristol and harness the dynamism of Sam Phillips' Memphis, Grant-Lee Phillips (no relation) digs deep into the musical soil of Tennessee on 2016's The Narrows. Always the troubadour, Phillips thoughtfully meanders through the ruins of the American Civil War toward the young railroad towns of the South ("Holy Irons") and out to the Western frontier ("San Andreas Fault"). Burnished with an acoustic warmth, Phillips' self-produced eighth solo release ranks among Americana's finest this year. (Sleva)

Matt Scottoline named his band Hurry as a tribute to the way he writes songs. To the contrary, these songs don't sound tossed off in the least. The Philadelphia band's third full-length, Guided Meditation, is reminiscent of Grand Prix-era Teenage Fanclub blasted through a haze of classic Weezer. If that sounds irresistible, mosey on over to the intersection of power pop and indie rock and listen to some Hurry. Take your time. (Ed Zeitz)

For having only released a debut full length, this Boston trio sure has its act together with 13 mostly short tracks (10 under two minutes) heavy on choppy, agitated chords, along with forceful vocals from either Zoe, Matt, or both of 'em together. Nearly all of Tuesday Night Live's songs feel frantic but never out of control, and the band has that scrappy, underdog quality that endears you to it on the very first listen. Halfsour also unleashed a bustling EP ("Charm School") late in the year, half doubling our pleasure with six more fully feverish tracks. (Zeitz)

Back To Nebraska EP

When you hear that one of your favorite bands from, say, the mid-'90s, is planning to release new music for the first time in almost 20 years, you might hold your breath, thinking "dear sweet jeebus, please don't let it suck." After the first chorus of Back To Nebraska's bangin' opening track ("Can't Say"), you exhale, as a smile creases your face. After the first bars of the next track, "4 Leaf Clover," pure giddiness sets as you realize that Letters To Cleo has picked up right where they left off. Kay Hanley's voice has remained pure and muscular, while the rest of the band settles into a familiar and potent groove on all five songs. For fans both old and new, the Cleo comeback is quite welcome. (Zeitz)

Defying categorization, Kadhja Bonet's debut EP is a tasteful menagerie of songs that highlight her talents not only as a songwriter, but a guitar, flute and string player as well. The penultimate track, "Nobody Other," is a stunning piece of pastoral pop that serves as a nice counterpoint to the records other classically influenced ditties like "Fairweather Friend." The Visitor's fantastical textures and musical imagery sound just as much at home in the present as they do the past and future. (Teddy Eisenberg)

Armed with existential dread and a snarling guitar, Cleveland songwriter Rick Spitalsky has penned an impressive assortment of lo-fi anthems on his second outing as Extra Medium Pony. Songs like "Further Along" recall the glory of loveable loser bands like Built to Spill, Pavement and Herzog, while tunes like "Reindeer Boots" show Spitalsky expanding his talents as a songwriter. Don't let the title of this record fool you, the songs here are anything but meaningless. (Eisenberg)

New Planet Trampoline has crafted the local psychedelic masterpiece of 2016, bringing their own inspired form of haunted rock to the sprawling double LP Dark Rides and Grim Visions. Showing themselves equally as comfortable riding the waves of big riffs on "Dark Rides" as floating through the breezy, Brit-pop melodies of "There Is Nothing More To Say," this quartet serve as the perfect tour guides through a musical wonderland bigger than the listener knew possible. (Eisenberg)

In a year where pop music can largely be viewed as cookie cutter or uninspired, Cleveland's own Roseanna Safos challenges the very boundaries of the genre with a dizzying collection of garage gems on Ruff Tape. Drawing on genres from indie to doo-wop, songs like "Diego" and "I Found My Baby" show pop music at its most distorted, but also it's most fun. Good luck getting any of these melodies out of your head anytime soon. (Eisenberg)

Tune into WRUW 91.1 FM Cleveland or online at WRUW.org to hear: