Another club bites it

The Akron club formerly known as Ron’s Crossroads, the Voodoo, Bar Fly, the Fly, the Crossroads, and Temple Tavern is now an empty lot.

Through the 1990s, it was a Rubber City stronghold for metal bands. Sometimes called “the house that Ripper built,” Ron’s Crossroads was a home base to local bands like Spawn and different Tim “Ripper” Owens bands including US Metal. National acts like Slaughter, Overkill, and Sevendust played there on their way up (or down).

Click here to read a full obituary. What follows here are some scene luminaries’ favorite memories of the venue’s glory days. 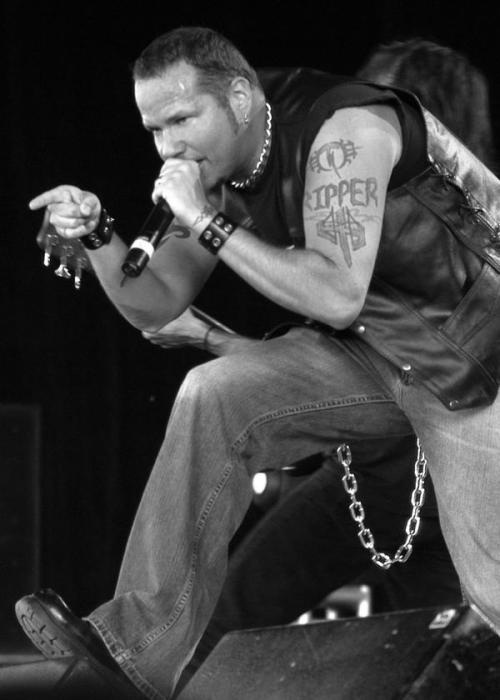 Joe Kleon of WDJQ/WDPN, formerly of WNCX and metal show host at WJCU: “In its heyday, Crossroads was THE place to go to see both original rock and metal bands and copy bands. Hell, it is where Ripper [Owens, pictured] basically got his start. My favorite show was a live recording I did, broadcast on WJCU, from Akron band Lanz End. I think it was 1991. The place was packed and it was just amazing. Overkill also played there, but I can't remember the year. That was another of my most memorable shows there. I was writing for Scene at the time and Scene would not publish my Overkill review, because I was very hard on security, who were very rough on fans.”

Former WMMS Metal Show co-host Matt Wardlaw: “I went there for the first time in mid-2001 to see Sinomatic, the headlining act on an evening of local bands curated by [Metal Show co-host] Chris Akin. On the eve of the release of their national debut, they looked every bit like the rock stars that they were hoping to become and threw down a set that was massive.

“The club itself was instantly charming, a bit dumpy when you first walked in (as every rock and roll club should be), but a quick glance to the right revealed the huge Crossroads stage, and it was evident that the bulk of the money had been spent on making that stage and sound the best that they could possibly be. On the walls, lots of photographic evidence and autographs from Tim ‘Ripper’ Owens, a regular at Crossroads, at that point of course living the dream as the lead singer of Judas Priest. Ron's Crossroads was one of the best sounding rooms in Akron, and the only club that I've heard come close since then would be The Lime Spider.

“Ron and Dolly were certainly loved on the local scene, and quickly became known to me as a pair of people that treated local bands with mutual love and respect that couldn't be found elsewhere. It's a shame that it all went to hell — it was one of my favorite rooms to see live music in.”

Jon Epstein, bassist of Last Stone Cast, formerly of Fast Chester, who briefly managed the club in 2006: “[My favorite show was] probably Mushroomhead in about 1994 or so. It was still Ron's Crossroads, and man! What a great show. This was before the masks and whatnot. Jay Jay was still the guitarist, and Trixie was running around wearing nothing but electric tape. King's X was my personal triumph in that regard. Very cool show.”

Classic Metal Show host Chris Akin: “When Union came out, I had set up a meet and greet with John Corabi [ex-Motley Crue, Ratt, the Scream] and Bruce Kulick [ex-Kiss]. The deal was fans would get to watch sound check, then the guys would come down and shake hands, meet people, etc. Well, Bruce Kulick was in a shitty mood, and decided he wasn't going to do it. I lost it, and him and I got into a yelling match. Corabi came over and calmed things down, and eventually made things happen. He was super cool, and literally signed things and just hung out with the fans for hours. Additionally, Dolly [then-owner Ron Trocchio’s wife] bought everyone who stuck around between the meet and greet and doors (approximately three hours) a dinner platter and hooked everyone up with some cheap beers to make it into a really fun time. It was very cool.” — D.X. Ferris