These guitar builders are custom-made for reality TV. 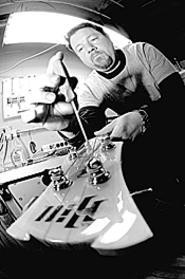 Walter Novak
Coming to a TV near you: Jon Hill puts finishing touches on a custom-built guitar.
It's hard to watch Jon Hill get evicted from his Tremont home -- and even harder to turn away. The thirtysomething head of Cleveland's Hill Instruments, which has made custom guitars and basses for such big names as Slayer's Tom Araya and Godsmack bassist Robbie Merrill, pleads with his landlord over the phone. "I'm gonna have the money when I come back," he promises, requesting to pay his delinquent rent after he returns from a trip to the NAMM musicians' convention and trade show in California. The landlord doesn't budge. "This is bullshit," Hill fumes.

Two months later, Hill sighs as he watches the scene play out on a small TV in the office of his mid-size manufacturing complex on Cleveland's near West Side, which smells of sawdust and spray paint. He looks both amused and a little embarrassed, like a kid who's just gotten pantsed in gym class.

The footage is part of a five-minute clip that's a teaser for a new proposed reality show, Axe 2 Grind, which follows the ups and downs of Hill's business. Hill and his three-man crew build guitars, smash guitars, and chastise each other with enough force to wither Judge Judy. It's kind of like a heavy metal Monster Garage, with hot licks in place of hot rods.

"You spend a day in my life, man, you'll understand juggling bills," chuckles Hill. Clad in a striped work shirt, he's on his lunch break, sipping a Corona. "We have struggled. We do struggle."

Hill makes around 80 guitars a year; they retail from $900 for his two entry-level models up to $5,000 for top-of-the-line custom-made guitars. From the beginning stages, when he selects wood for the guitar body, to when he glues on the neck and lets it dry, paints the instrument, and then installs components, each axe takes from three to four months to complete. By spending so much time on each guitar, Hill has developed a reputation for the handcrafted feel of his instruments.

"I've had every guitar you could possibly have, and since I got my first Hill, I have literally not played anything else," says Aaron Dowell, a longtime player of Hill guitars who now works with Hill in his shop.

These dudes may be misfits, but you root for them: a small, independent Cleveland company, battling to establish a niche in an industry dominated by corporate giants.

The reality show was launched almost by chance, when producer Frank Amato, of the locally based Amalon Entertainment production company, accompanied a friend to the Hill facilities to pick up a guitar he had ordered.

"I walked in, I met all the guys, I was looking at the shop -- I'm like, wow, a light bulb just went off: It's like this is the same kind of situation as American Chopper, Monster Garage, except they're making guitars," says Amato, who plans to begin shopping the teaser episode to networks soon. "I think it has all the elements of what you would want to see in a show, the characters that keep you coming back each week."

Hill's staff is mainly composed of longhaired rocker types, including Dowell and Ground Zero axeman Kevin Kadar. Together, they've helped Hill Instruments blossom of late. After years of slowly building his business into a nationally renowned enterprise, Hill is finally starting to turn a steady profit.

Launched in the early '90s, when Hill was 24, his company established a name for itself building custom guitars for such Cleveland notables as Michael Stanley, Neil Zaza, and Kidd Wicked's Aaron Adkins. Hill merged his business with Dean Guitars in 1994, relocating to the company's Miami headquarters.

But then Dean went belly up, and Hill's business went down with it. In 2002, he relaunched Hill Instruments from his garage as a one-man operation, moving it into his current digs two years later. Now, after a successful trip to NAMM, Hill is flush with orders, and his guitars will soon be found in music stores from New York to California.

The show, then, could crown what's shaping up to be a banner year -- or be as embarrassing as naked-baby photos. "You might end up doing it and you look like a total dillweed; it could hurt you when you put yourself in the public eye," Hill says. "I think it's a long shot in general, but we'll see what happens," he adds, finishing off his beer and heading back to work. "Meanwhile, we've got a bunch of frickin' guitars to get out."