The Academy Is... gets back on track again with Fast Time 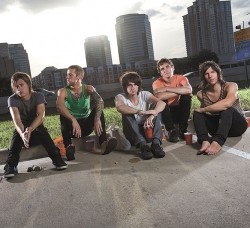 It happens more often than it should. A band releases a debut album that's so innovative, smart and just plain amazing that fans find themselves wondering if the band can do it again. For the Academy Is… that album was 2005's Almost Here. The Chicago group followed it up with a less-than-amazing second album, last year's Santi. While the record was a valiant effort with some standout tracks, it was a mess of ideas. Those who lauded the Academy Is…, calling it the next big thing, began to wonder if the band could make an album that lived up to its debut but still managed to showcase musical evolution. Thankfully for the Academy Is…, Fast Times at Barrington High is that album.

As they grow older, many pop-punk bands try to make albums that are "mature" and "grown up," but the Academy Is… decided to go back in time and make an album that's young yet creative at its core. It plays like a yearbook, but this isn't the usual nostalgic-for-high-school album. The opener, "About a Girl," channels juvenile puppy love but doesn't sound trite or overplayed. Instead, it's defiant, with William Beckett singing "I'm not gonna waste these words about a girl." Slow, steady vocals are paired with an energetic tempo, making "About a Girl" worthy of its status as the album's first single. The band keeps the pace up with the wistful seasonal tune "Summer Hair = Forever Young," a track that'll make you yearn for the summer vacations you wasted away as a kid.

The record doesn't slow down much, and each song is tweaked just enough to stand out. The disc veers from "Crowded Room," an in-your-face schoolyard catcall that could rival anything from Gwen Stefani and her Harajuku girls, to "Beware! Cougar!," which has just enough rock-star bravado without seeming pretentious. The best thing about Fast Times at Barrington High is that it combines the raw talent of Almost Here and the ambition of Santi, making it a polished album that takes a less-is-more approach.

The Academy Is… gained fans and praise for its clever lyrics and uncomplicated melodies, and this is a reminder of the band with which people first fell in love. The over-the-top musical ideas of the last album have been replaced by 11 back-to-basics tracks that showcase the sound that made the Academy Is… so great in the first place. [email protected] Academy Is… Fast Times at Barrington High (Decaydance/ Fueled By Ramen)