Back To The Beginning

Howie Smith Revisits A Composition From His Past 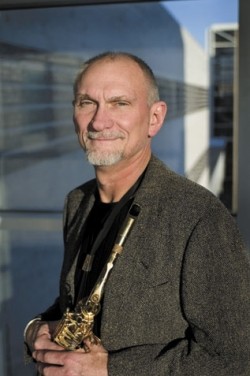 Howie Smith's annual Concert in Progress, now in its 29th year, tends to defy expectations. Anyone who has attended past shows or seen Smith in other musical settings - from playing with a jazz trio to performing with the Cleveland Orchestra - knows that the thrill and challenge of continually pulling off something new is a major incentive for Smith. This year he'll be reprising and recreating "The Speed of Time," a piece he first performed in 1994, then played again in 2001. He'll be the lone performer onstage, armed with soprano, alto, tenor and baritone saxophones to accompany - and perhaps confront - the prerecorded material coming from a nine-channel surround-sound speaker system.

"It's like a suite, but there's transition material from one [section] right into another," says Smith recently in his Cleveland State University office. He says he'll control the recorded saxophones, electronics, voices and percussion by cuing engineers in the control booth.

"Knowing where each of those sound sources is in the hall and what should be coming from each one" is a challenge the saxophonist says he welcomes. "The sound is moving; it may be shifting, it may be bouncing, it may only be coming from one place," he says, with a twinkle in his eye and a tendency to laugh at the impossible a product of his long, diverse path of musical discovery.

He sees a work like "Time," which contains elements of ritual and performance art, coming as much from his high-school marching-band days as from playing with experimental musicians like John Cage and Anthony Braxton.

"It's sort of a 65-, 75-minute narrative," he explains. "I hope it's like anybody that's telling a good story. You have increased and resolved tensions. There's a whole bunch of different stories throughout, [and] I have to become all these stories.

"Anytime people go to a concert, there are no two people in the hall who hear the same concert," he continues. "Not only because of preconceptions that they bring to the concert, but they're not sitting in the same place. They're not receiving those sound waves exactly the same as somebody that's sitting a row in front of them or behind them or four seats to the left. So I like to take advantage of that idea and move sound around."

While he denies that reviving the piece after a passage of years is in any way related to its title, "Time," with its recorded-musician/live-musician construct, does in a sense return Smith to the beginnings of the Concert in Progress series. Originally, it was called "Howie Smith vs. Howie Smith," and each year a Roman numeral was added to the poster. But after a few years, Smith was inspired to change the name by the signs that hang on doors outside orchestral halls: "Do Not Enter, Concert in Progress." The sense of danger in the juxtaposed phrases intrigued him, and the name stuck.

"Some of [it] may sound dated," he says about the piece, explaining his reticence to rerecord the sounds he painstakingly laid down on a 24-track machine back in '94. "[But] there's a certain thing about using that old sound that I like. I'm 15 years older, so I've got different ways of looking at some of that stuff."

But while time may provide new and deeper insights, Smith, now in his final year as a full-time professor, understands it doesn't lessen the physical and emotional demands of the piece.

"I have to get myself in shape," he laughs.