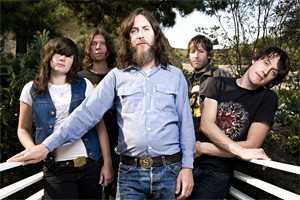 You wouldn't guess by looking at them, but Black Mountain's members will probably be stoned when they play the Grog Shop.

Black Mountain is an anomaly among Canadian bands. For one thing, it has only five members. And they don't play highfalutin chamber-pop that requires the assistance of at least two dozen instrumentalists onstage. You can practically smell the weed of inspiration burning throughout In the Future, the British Columbian band's terrific second album — which juggles riff-crunching stoner-rock (the appropriately titled "Stormy High"), goat-petting folk ("Stay Free"), and proggy epics (the 16-plus-minute "Bright Lights"). Black Mountain rocks as hard as Sabbath one minute, turns as translucent as Nick Drake the next. That versatility is another thing that sets them apart from their glockenspiel-playing countrymen.