Metalcore Band Makes Inroads Despite Feuding With Its Label 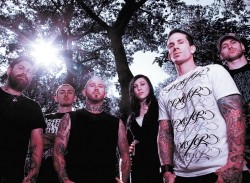 Life should be pretty sweet for Bleeding Through right about now. One of the most highly regarded U.S. metalcore bands, it opened a national tour with Slayer and Marilyn Manson last year and is set to release its impressive and highly anticipated fifth album, Declaration, at the end of September. But it's caught up in a bloody and public feud with its label, the (it seems now) ironically named Trustkill Records.

"What's tour support? I don't even know what that is," says frontman Brandan Schieppati by cell phone from Dallas. He and his bandmates - guitarist Brian Leppke, bassist Ryan Wombacher, drummer Derek Youngsma, keyboardist Marta Peterson and new guitarist Jona Weinhofen - are paying their own way on a U.S. jaunt with Bullet for My Valentine, Cancer Bats and Black Tide. Schieppati's hoping both he and the Bullet guys will have better luck on the road - Bullet had to cut its last tour short due to illness in bassist Jason James' family, and its vocalist, Matt Tuck, suffered vocal problems throughout 2007.

BT is one of at least three Trustkill acts currently battling the label's head, Josh Grabelle, over issues of money and artistic autonomy. Hopesfall broke up earlier this year, and drummer Jason Trabue said in an interview, "He's not the reason we broke up, but I do hate him." Throwdown left the label after the 2007 release of its third album, Venom & Tears, and has since gone public with charges of unpaid royalties and thousands of dollars of debt. Walls of Jericho was reportedly told it had to return to the studio to finish its new album, The American Dream, which caused the band to miss a spring U.S. tour with Napalm Death and DevilDriver. BT, for its part, told Trustkill it wouldn't relinquish the masters of Declaration, its third album for the label, until band members were reimbursed for the recording costs.

"We got reimbursed by Trustkill's distributor, Fontana," says Schieppati. "If Trustkill wants to say they reimbursed us, then they can say that, but it definitely came straight from the distributor.

"We're managed by the same company [as Throwdown]; we started around the same time - I used to actually be in Throwdown a long time ago, playing guitar," he continues. "We're really close with them, so they know about everything we're going through, and we know everything they're going through. It's just really unfortunate, because both us and Throwdown signed to Trustkill because, in the beginning, we were really good friends with the owner. And it's just really unfortunate that it went away, from a personal level. Now it's completely on a business level, and it's just kinda sad."

It's all the more sad because Declaration should bring Bleeding Through to the next level commercially. Artistically, it does that and more. The band seems to have finally brought the elements of its sound together on this album, Peterson's gothic keyboards accentuating the crushing riffs of Leppke and Weinhofen as the melody quotient rises substantially. A moody intro, "Finnis Fatalis Spei," leads into "Declaration (You Can't Destroy What You Can Not Replace)," a manifesto as much because of its relentless blast beats as its anthemic lyrics.

As the disc progresses, the punishing, Lamb of God-esque "Germany" is followed by "There Was a Flood," which mixes synth pomp and double-kick drumming like a Californian version of Dimmu Borgir. Toward the disc's end, "Seller's Market" is a savage, triple-time track that reveals the band's punk roots better than anything since its noisetastic cover of Black Flag's "My War," from 2003's Black on Black tribute compilation. The lyrics are the usual maudlin narcissism common to metalcore, but that's what the kids packing Bleeding Through's shows long to hear, and the musical performances are strong enough that older headbangers ought to cut the band quite a bit of slack.

Devin Townsend's impeccable production consistently shows the group in its best light. The guy knows how to make a crushing record, and the band loved working with him. "He's very enthusiastic," says Schieppati. "He kinda puts on a little bit of a front onstage, but in the studio he's very focused and very relaxed. That's one of the things he contributed to us, was in light of this whole Trustkill business - he worked on making us feel really at home and really relaxed so it didn't affect the product.

"He has such crazy ideas," he recalls, "[but] we hit it off so well, seeing eye-to-eye, and he didn't force us to do anything we didn't want to do. A lot of producers will force their ideas on you, and he was always like, 'I'm gonna throw this out there, and if you guys like it, you do. If you don't, fuck it, who cares? Write what you guys want to write.'"

Declaration is the band's first album with new guitarist Weinhofen, and Schieppati recalls that it "took a little bit for Jona to get in the swing of things. He joined right as we were starting to write new material, and that's hard. But his biggest contribution wasn't necessarily the material he wrote; it was the energy he brought to the studio. The reason we parted ways with Scott [Danough] was his lack of drive, and that's something Jona definitely doesn't lack. He was in that studio all day long - he's a perfectionist, and that's something we wanted. We kinda needed a fresh face in this band to get the rest of us rejuvenated."

With a little luck, the new album won't be overshadowed in the marketplace by Trustkill's current attempt to squeeze some quick cash from its alienated stars - BT's 2006 album The Truth has just been reissued with bonus tracks and a live DVD, and the band's not at all happy about it. "We've been encouraging people to not buy it," says Schieppati. "It's something we never condoned from the beginning. Those cover songs and rarities and stuff like that - those were exclusively for the purpose of why we recorded them, not ever to be re-released on Trustkill. And the live DVD they put out was of a San Diego show that we played with Slayer. It wasn't even our show. If we're gonna put a live DVD out that represents what this band's about, it's not gonna be in a fuckin' arena with no crowd response. It's gonna be in a 500-capacity room where kids are fuckin' jumping off the walls. We were very fortunate to be on that tour, and touring with Slayer was a dream come true, but man, I never thought that'd be documented in time, you know?"

Still, Schieppati knows that sometimes it's important to pick your battles and focus on the future. "When I see kids coming up to us at shows to get [the DVD] autographed, I don't say anything," he says. "I don't wanna make a career out of bad-mouthing Trustkill … We're gonna be a free-agent band, we're a proven headlining band, we've proved that we sell records, we've proved that we put people in the buildings and we kinda have our own destiny in our hands right now. We've looked into options of just licensing it to labels and owning our own recordings, but we'll see in a couple of years where the music industry is."