Blended: New Orleans Suspects Combine the Past with the Future as a Funky Supergroup 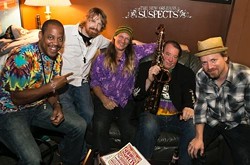 In 2009, a new band began to form out of the osmotic New Orleans music scene. They gathered at The Maple Leaf Bar, a storied uptown venue that’s hosted some of the city’s most most legendary bands and musicians since the mid-70s.

The New Orleans Suspects — Mean Willie Green on drums, Reggie Scanlan on bass, Jake Eckert on lead guitar, CR Gruver on keys and Jeff Watkins on sax — grew out of a natural sense of chemistry and a love for the city’s musical traditions. The band’s genesis was auspicious from the start; the musicians’ chemistry together was clear to anyone who was listening. And even though each guy was remaining busy with his own work (their dossiers include years spent as members of the Radiators, the Neville Brothers, The Meters Experience, James Brown's Band, and The Dirty Dozen Brass Band), they couldn’t deny the “aha” moments they found onstage together.

“We were playing New Orleans primarily whenever we happened to not be on the road at the same time,” Gruver tells Scene, adding that the band hadn’t yet become a full-time band in those early years, around 2009. “Anytime we had a chance to, we’d record a tune in the studio. We came up with a bunch of songs.”

The band assembled from its mighty collective knowledge two albums of covers and originals, but, still, they were chasing something. The hypothesis hadn’t yet matured into a answer, a path forward.

“In those two years, the band morphed quite a bit,” Gruver says. And so even when the second album landed in 2011, the musicians felt that they had already moved beyond the material they had just released. They took to the stage at the Maple Leaf and recorded back-to-back shows to capture what they had become. Caught Live at the Maple Leaf indeed captures the band in their high-energy state of being in 2013.

Then the real party began.

In 2014, the band released Ouroboros, a dynamic album of original tunes that really brings the traditions of New Orleans music to the forefront of the city’s emerging hybridization.

“Ouroboros was really kind of us putting our foot forward as an original band, saying, ‘Here’s who we really are,’” Gruver says. “We really dove deeply into New Orleans rhythms — from New Orleans funk and Mardi Gras Indian rhythms to some of the R&B and old dirge feel from a second line jazz funeral and wrapped some horn lines around that. We really embraced New Orleans’ heritage.”

Most recently, the band returned for their fifth year at the New Orleans Jazz & Heritage Festival, a much-beloved celebration of the city’s musical legacy, which, this year, found itself on the wrong end of that region’s bad weather. Thankfully for the Suspects, they landed on the first weekend’s bill and managed to avoid the wildly heavy rains. “It was probably our best turnout of five years playing fairgrounds,” Gruver says, adding that they added in a lot of the new material. (Scanlan, by the way, isn’t touring with the band these days; Charlie Wooten is playing bass on the road.)

With a tour unfolding now, the band’s sights remained set on the future. Their new album, Kaleidoscoped, will drop in late summer, and the band promises even more expansion and examination of their roles as musicians from the country’s most dynamic and curious musical city. The name, of course, is a clear riff on the variety of moods and roots intertwined among the songs.


“We really started stretching ourselves musically and exploring different things,” Gruver says. “For myself I’ve been so immersed and influenced by the zydeco culture that a zydeco song kinda came out of that. And I was drawing on my older roots in funk music on some of the tunes. When you listen to the tunes they all have their own distinct character, and as a collection it really kind of goes all over the place as far as stylistically and where the influences come in.”

Guests show up across the album’s tunes — including Little Feat’s Paul Barrere, whose friendship with the band members blossomed into a terrific working relationship. He brought along an old song from a side project, and the Suspects happily laid it into their budding musical collage on Kaleidoscoped.

“It’s that kind of vibe where we have these relationships with these guys that have become something bigger than just a random sit-in,” Gruver says.

And that’s it: The Suspects’ overall ethos reflects the communal spirit of New Orleans.

“It’s something that I think the musicians in this city are drawn to,” Gruver says, “and something that we not only are drawn to as the New Orleans Suspects — we also kind of rely heavily on it. It’s a kind of party atmosphere that here. There’s something about the music — not just the rhythms, but also lyrically and the things we talk about down here — that’s just about the party that we’re having. Food. Mardi Gras. It’s a culture that’s gotten so good at celebrating life, and it’s almost because there’s so much danger here between the floods and the hurricanes and even just the crime. It’s almost like the culture — in my mind — has embraced its mortality and celebrates its life.

“What really comes out of the music and the dancing and the parades is this revelry. We’re having a great time. That’s what we find we’re bringing to the city. And I think that’s what draws people to not just the city, but to the music. When we come to Ohio or wherever we might be, they don’t have that culture around them. And they get a taste of it for a night or a couple hours. They can immerse themselves with us in that, and we find that people really react.”