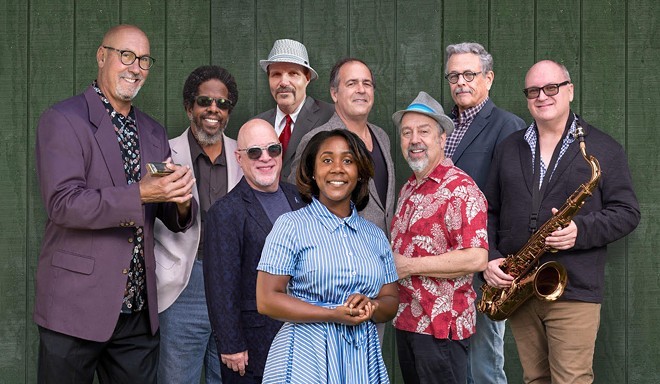 Courtesy of Blue Lunch
Blue Lunch.
Last year, the local jazz/swing/blues band Blue Lunch was all set to resume an annual tradition that the pandemic had wiped out in 2020 — its annual Christmas Day latke party concert at the Beachland Tavern.

And yet, Omicron had other ideas.

“The dominos started falling,” says the band’s Pete London via phone when asked about last year’s cancelled performance. “It was a perfect storm. I remember even four days out, it was still in the works, but things were changing rapidly. It was kind of like when things happened in March of 2020. We officially pulled the plug, but everything was cancelling at that point. In hindsight, it was the right decision.”

This year, the group has once again booked its annual latke party for Christmas Day at the Beachland. It’ll mark the return of a beloved local tradition that started years ago at some of the city’s smaller blues and jazz clubs.

In the early days, the group held a holiday concert at Jones Co. Tavern, which was located in Cedar Center. It played a few holiday shows at Wilbert’s too. Once it went to the Beachland some 14 years ago, it started going there every year.

Since many band members are Jewish, London says playing a concert on Christmas seemed like a natural thing to do.

To make the show into something really special, the group will bring in a few special guests this year. Harmonica players Hank Mowery and Tom Moore will sit in with the band. Mowery fronts the Grand Rapids, MI-based Hawktones and has worked with Pinetop Perkins, Nick Moss, Rusty Zinn and many others. Moore was the frontman for Little Frank and the Premiers for many years, and he also released two albums with the Moore Brothers Band. He also produces the blues and roots podcast, Mambo Sauce.

Local soul singer Maya Nicholson, who’s currently playing Cinderella in a local production of the musical, will join the group to sing tunes by Etta James and Ann Peebles.

“That’s the fun thing about this band,” says London. “The band has so much variety, we can do shows with guest artists and really work with a wide range of acts from blues to soul and even some jazz. Lately, we’ve been doing more soul things.”

Given that the band recently added some additional members, London says the veteran band has worked new material into its sets.

“Some people think of us as a swing band, but we do more straight blues and more soul now thanks to our guitarist Billy Seward,” he says. “We do some originals and classic covers. There are tons of blues-based bands throughout the country, and there are lots of talented artists under the radar. I like to think Blue Lunch is a band with veteran talent even though the average person around the country hasn’t heard of us.”

While the latkes won’t be included in the ticket price, the Beachland kitchen will adapt to make the potato pancakes available just for Blue Lunch’s concert.

“It’s kind of nice that the Beachland cooks the latkes and will have all their other food too,” says London.

Doors open at 6:30 p.m., and London will spin blues, soul and R&B on vinyl before Blue Lunch hits the stage at 7:30. Coming soon: Cleveland Scene Daily newsletter. We’ll send you a handful of interesting Cleveland stories every morning. Subscribe now to not miss a thing. Follow us: Google News | NewsBreak | Instagram | Facebook | Twitter