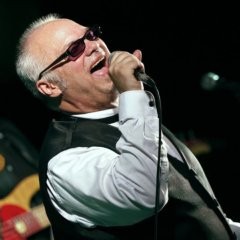 Alligator Records
Known as the home to many indie and emo acts, Portland, Oregon, also features a thriving blues scene. Singer-guitarist Curtis Salgado would know. Born in Washington, he has lived and worked in the Portland area for decades.

“Yes, there’s a great music scene here,” he says via phone from his Portland home. He comes to the Beachland Ballroom on Aug. 14 to play a blues double bill that also features Walter Trout. “Bands often develop themselves here and then go somewhere else, but there’s a lot of music here. It’s Grand Central for blues.”

He also says the scene has “suffered a bit” due to the death of some people. Harmonica player Paul deLay died in 2007. Jazz pianist Janis Scroggins, whom Salgado describes as a “genius,” passed away in 2014. Blues singer Linda Hornbuckle also passed away in 2014. “She could sing circles around the new new-soul singers,” Salgado says of Scroggins.

Salgado, who just released the vibrant The Beautiful Lowdown, started his career some 40 years ago. He grew up listening to Count Basie and Fats Waller. At some point, his older brother and sister introduced him to Wilson Pickett and Muddy Waters. Before long, he had taught himself to play harmonica.

“You listen to the records and learn how to play that way,” says Salgado. “I listened to Lil' Walter and Muddy Waters and Charlie Musslewhite and Paul Butterfield. Once I heard Paul Butterfield, I was like, ‘Wow.’ My mother bought me a book on how to play harmonica by Tony 'Little Sun' Glover. It didn’t take long to figure out that he was wrong in his transcribing of juke. Other harp players will say the same thing. You put the needle on the record and you practice and then you meet somebody you can teach you. I saw Paul Butterfield and then I went back to the drawing board. He doesn’t follow the typical melodic lines. He approached it as a frustrated clarinet player.”

When he was in his early twenties, Salgado led his own band, the Nighthawks and then joined the Robert Cray Band. In the '80s, Salgado also played with the long-running blues outfit Roomful of Blues. During that era, the blues went mainstream and even MTV played videos from Cray, Stevie Ray Vaughan and Fabulous Thunderbirds.

“Those were the good ol’ days, and now Robert [Cray] has five Grammys under his belt,” says Salgado. “Robert is unlike anybody out there. His guitar player is not linear. It’s very sophisticated. Nobody writes tunes like that. Clapton plays linear and so does Gary Clark Jr. They all play straight ahead, but Robert comes from a different perspective. There are a lot of surprises. It’s just killer.”

Salgado has called his latest effort, The Beautiful Lowdown, his "most adventurous" album. The hard charging album opener “Hard to Feel the Same About Love” features spirited horns and soulful vocals. Salgado even gives reggae a go with “Simple Enough.”

In the politically-charged “I’m Not Made That Way,” he addresses the hypocrisy of the world in which we live.

“I don’t do a lot of political tunes,” he says. “But [the song] is about all the greed and Wall Street. It’s just weird times. A white friend of mine was in the Deep South and pulled over to get a little shot of God on a Sunday with his wife and was asked to leave the church because they weren’t like the other folks there who were also white. It’s so backwards there and they’re into the ‘you’re not part of this neighborhood’ crap. The house should be open to everybody. It’s so hypocritical. It’s like the McCoys and Hatfields.”

Salgado says he doesn’t think of his music as eclectic. Rather, he says he just likes good music and he sits and writes without thinking of where the tune is going to go.

“My music is a gumbo mix,” he says. “I like Buckethead and Rage Against the Machine, but I also like Parliament and Bootsy Collins and James Brown and Lil’ Walter and Sonny Boy Williamson. Whatever hits me, I like. There’s only two types — good and bad, based on the ear of the individual. Blues is a feeling. I find it in the bleus in Hank Williams and Pavarotti and Beethoven. Beethoven has some wicked pieces that are nothing but the blues. You can feel it.”