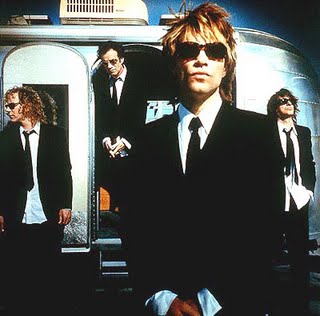 It's called "We Weren't Born to Follow," and it was released to radio yesterday.

We find this beyond hilarious, because Bon Jovi has pretty much made a career following music templates laid down by other, better artists (starting with Bruce Springsteen and ending with whatever country-pop guy they ripped off on their last album).

The song — which is from the band's upcoming album The Circle, coming out on November 10 — features typical Bon Jovi radio-anthem polish and rah-rah lyrics like "When life is a bitter pill to swallow, you got to hold on to what you believe/Believe that the sun will shine tomorrow, and that your saints and sinners bleed."

Sounds like they're following a book of inspirational clichés your mom reads every morning to get her through the day. —Michael Gallucci