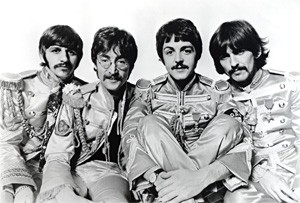 As two different Radiohead releases last month prove, box sets still confuse the hell out of fans. The "discbox" version of the band's new album, In Rainbows, comes stuffed with extras — which range from useful (music) to aimless (booklets and artwork) to mystifyingly redundant (CD, 12-inch vinyl, and MP3 versions!).

Meanwhile, Radiohead's old label, EMI, cashed in on the free-download delirium surrounding its ex-signings by releasing the group's entire back catalog as both a traditional bunch-of-CDs-in-a-box package and a newfangled four-gigabyte USB thingy.

Blame it all on George Harrison. When the former Beatle added an extra "jam session" disc to his already double-length All Things Must Pass in 1970 (thus creating the world's first triple album), it soon dawned on record companies that there was money to be made from such flourishes. It took a pair of '80s milestones — CDs and nostalgia — for the trend to really take off. Suddenly, back catalogs were repackaged as grand "box sets" with all sorts of extra features, ranging in pointlessness from bonus tracks to the box itself.

When the Beatles finally got around to releasing the U.S. versions of their early albums on CD in 2004, they could have just issued each one on a single disc. Instead, they packaged the eight albums into a pair of grand collections portentously titled The Capitol Albums Vols. 1 & 2, which were padded out with separate mono and stereo versions of each disc to justify the bloated price tag. Ka-ching! It didn't help that the record company had already released every Beatles rarity worth listening to (and a lot more besides) on the six-disc Anthology series.

But the box-set phenomenon isn't restricted to big-name acts, as Merz­bow, an experimental musician from Japan, proved in 2000. His Merzbox confirmed that a little imagination goes a long way. Not only did his mammoth box contain 50 CDs (20 of which were previously unreleased in any format), it also included such extras as a medallion and a stylish leather fetish container. Radiohead, take note.

While most artists assemble box sets based on an entire career's worth of songs, the Beach Boys marked a new high point of musical excess in 1998 by creating a set centered on a single album. The Pet Sounds Sessions took 1966's 13-track album and transformed it into a 90-cut, four-CD behemoth. In addition to the stereo, mono, and a cappella versions of every original song, fans could finally hear such treasures as "Highlights From Tracking Date," "Stereo Backing Track," "Promotional Spot #1," "Promotional Spot #2," "Original Speed, Stereo Mix," and "Original Speed, Mono Mix" — all variations of just one song, "Caroline, No."

In 2000, the nonsurfing surfers lost the title of Most Needlessly Overinflated Single-Album Compendium to the Stooges, whose 1970: The Complete Funhouse Sessions takes the concept of "complete" a little too literally — filling seven CDs with every minute of studio time used to record the 36-minute Funhouse. That means you get to hear 31 individual takes of the song "Loose" (at least 30 of which have previously been deemed inferior to the one you know and love), while nearly a quarter of the total 142 tracks are simply titled "Studio Dialogue." What better way to spend seven hours and 52 minutes of your life?

But there's help on the way for fans fearing overkill. Nirvana's four-disc, 61-track rarities collection, With the Lights Out, ranks as the best-selling box set of all time. But it's also notable for the shorter, more sensible 19-track single CD, Sliver: The Best of the Box, which came out a year later. It was a godsend for those of us unwilling to trawl through all of the never-intended-for-release nuggets included in the original set.

Jazz artists have traditionally been better served by lovingly compiled box sets, since alternate takes of improvised tracks are more likely to be significantly different from one another. The eight-box Miles Davis series that Sony issued through its Legacy imprint is a stunning achievement. Released over an 11-year period (and concluding with last year's Complete On the Corner Sessions), the sets together total 43 CDs and range in size from the three-disc Complete In a Silent Way Sessions to Seven Steps: Complete Columbia Recordings 1963-1964, which, appropriately enough, includes seven discs.

We can only dream that the company will someday release all eight boxes in one awesome package with live Davis sets like The Complete Cellar Door Sessions (six discs) and The Complete Live at the Plugged Nickel 1965 (eight discs). It's the only way any of them can ever hope to compete with the awesome, 20-CD The Complete Miles Davis at Montreux: 1973-1991 box.

But for the craziest box sets of all time, we have to turn to the world of classical music (not surprising, seeing that a full performance of Wagner's Ring Cycle takes more than 15 hours to complete). Depending on your budget, you can either pony up $1,600 for the Rubinstein Collection (which gathers the complete recordings of legendary pianist Arthur Rubinstein on 94 discs) or go for Wolfgang Amadeus Mozart's Complete Works 170-CD box, which is available from Costco for the bargain price of only $99.99. That even includes free shipping!