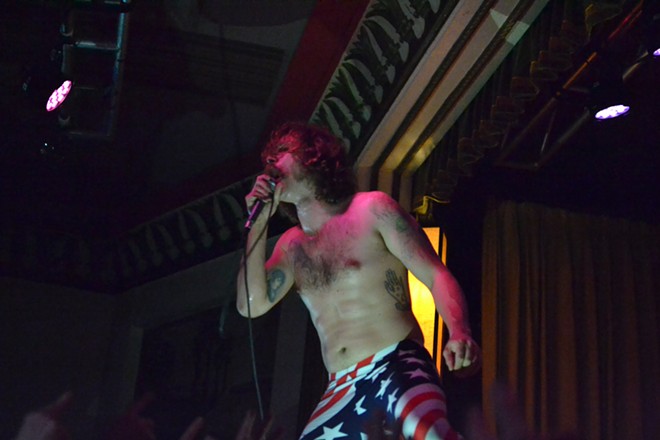 Jacob DeSmit
To a bystander observing the Beachland Ballroom last night, the line of ratty teens-to-Boomers decked in clothes black, ripped or studded that waiting outside the bar’s entrance, combined with the sound of buzzsaw-sharp guitars that leaked from the bar throughout the night, might have suggested that blood, or at least sweat, would spill on the dance floor for English rock quintet IDLES stop in Cleveland. Those inside the club saw a very different, though no less sweaty, outcome, as the hardcore punks inspired the most loving mosh-pit to hit the city yet this year, with a tight 75-minute set.

Internationally, IDLES is fast on the rise in the punk scene following the release of its latest album, 2018’s Joy as an Act of Resistance. The jump in popularity can be seen in Cleveland alone: in 2018, local fans were afforded decent elbowroom when checking out the band in the Beachland’s tavern. At last night’s sold-out show in the bigger ballroom, breathing room could feel hard to come by, particularly for those who found themselves trapped in the wall of bodies that careened into, and onto, the front of the stage.

Opening the show with “Colossus,” the first track that sets off Joy with a bang, IDLES established a unique tone from the start when, at the apex of the song’s long, tense build-up, the band stopped so that lead singer Joe Talbot could ask that “everybody look out for one another.” Fans eagerly cooed for what was to come next, as a snare shot by drummer Jon Beavis set off the song’s wild breakdown — along with the night’s first legit mosh pit — like a gun at a rally. But Talbot’s sincere request for peace, knowing chaos loomed, was the first hint of a wholesomeness that would pervade the band’s whole set.

This was most frequently expressed through silly dancing from Talbot and guitarists Mark Bowen and Lee Kiernan, even as they played brutal, searing guitar melodies and booming drums. Bowen, who wore nothing but a pair of American flag-patterned spandex, took breaks from shimmying across the stage to stand on the hands of the crowd or jump down into the pit to shred among them. Talbot dragged a young woman onto the stage to finish out the song “Well Done” before sending her sailing off atop the crowd of hands. The band’s engagement with its fans was solid throughout the night, and it added a layer of connectedness that heightened the night’s feel-good mood.

Musically, the group was on-point throughout its set, with a sound that closely mirrored what’s found on their studio releases. In particular, Beavis’ steady, thundering drumming was a reliably crisp and driving force. Although he stood at the back of the stage, bassist Adam Devonshire did well to fill out the bottom end of the band’s heavy sound. And while Talbot often verged on snarling out the songs’ lyrics, he also showed adeptness for singing, especially on crowd-favorite “Danny Nedelko.”

Ironically, the band ended its nearly entirely upbeat show with what Talbot described as “his favorite song, about [the band’s] hatred of your country’s right-wing media propaganda.” But even as they ended on one of the show's very few notes of cynicism, fans were left with little to feel disappointed about, other than how the band neglected to return with an encore.

Fontaines D.C., a group of punk rockers who, like IDLES, hail from the United Kingdom and record for the Partisan record label, opened the show. Although both bands are in a similar vein in terms of sound, they couldn’t be more different in terms of stage presence. Fontaines D.C. front man Grian Chatten strutted around the stage, looking like a mix of nervous tics and street fighter antagonism, but he showed full control in amplifying the band’s energy, especially on songs such as “Too Real” and “Boys in the Better Land,” and he gave the performance a tense vibe that fit the band’s sound.