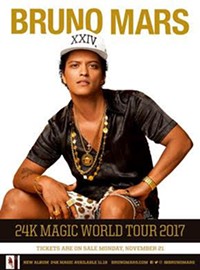 The 24K Magic World Tour will begin on March 28 in Antwerp, Belgium and travel throughout Europe before kicking off on July 15 at T-Mobile Arena in Las Vegas. The tour includes an Aug. 15 date at Quicken Loans Arena.

Tickets for the show at the Q go on sale on Monday, Nov. 21 but anyone who pre-orders the new album from the Bruno Mars store will receive early access to tickets for the tour.