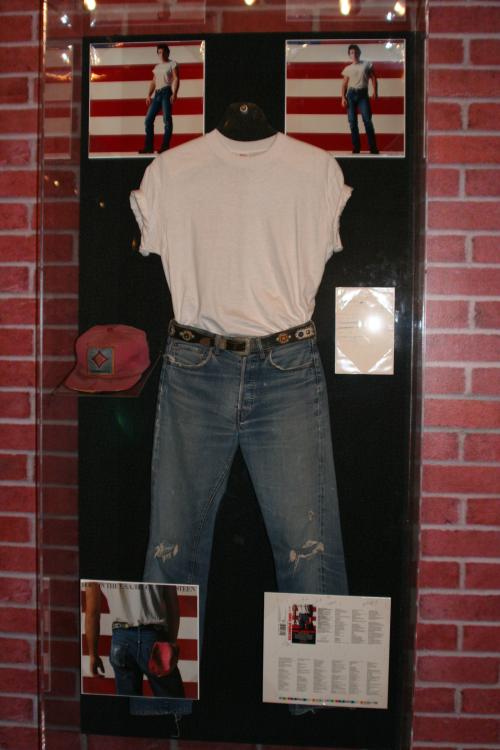 Got a sneak peek at the new Bruce Springsteen exhibit coming to the Rock Hall on April 1. Dubbed From Asbury Park to the Promised Land: The Life and Music of Bruce Springsteen, it’s an extensive look at all things related to the Boss. “There’s a warehouse in New Jersey where a lot of this stuff was stored,” explains curator Jim Henke during a brief tour. “A lot of is his personal stuff, too. None of this has ever been exhibited before.”

The Rock Hall has pursued a Springsteen exhibit for years but it was only last summer that they got the go-ahead to start collecting materials. The exhibit, which takes up the Hall’s top two floors, starts chronologically and features material dating back to the Castiles, one of Springsteen’s first bands. Castiles’ set lists and their lone single make up this part of the exhibit. There’s also a collection of rare childhood photos assembled here as well as posters and flyers for the Steel Mill, another early band.

Items from the start of his solo career include the very first demo tapes he played for Columbia Records and hand-written lyrics from his first album. Notebooks upon notebooks of lyrics are mounted on the walls. There’s the saxophone Clarence Clemons played on “Jungleland” and outfits from The Wild, The Innocent and the E Street Shuffle, Born to Run and Born in the U.S.A.

One prized piece is the Fender Esquire guitar from the cover of Born to Run. It’s Springsteen’s favorite guitar (he played it during his Super Bowl performance) and it surprised Henke that he was willing to part with it. “He talks about that guitar like it’s an extension of his body,” Henke says. “I don’t know how much he plays it anymore but I know it does come out now and then and people recognize it.” The exhibit will run into 2010. — Jeff Niesel