Cain Park Announces Its First Concert of the 2018 Season 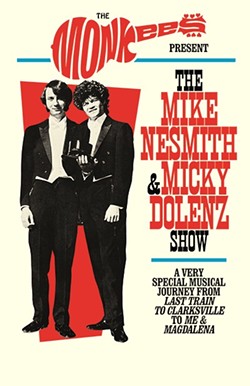 This summer marks the 80th anniversary of Cain Park, the municipally owned and operated summer performing arts park located in Cleveland Heights, and the venue's concert season will kick off on June 16 with the Monkees Present the Mike and Micky Show.

On their first ever tour as a duo, Monkees members Michael Nesmith and Micky Dolenz will perform songs that span the group's entire career. They'll even play some of Nesmith's compositions that have never been performed live.

"I love being on stage with Micky," says Nesmith in a press release announcing the tour. "We've been collaborating for over 50 years, so it's hard to believe it's never been just the two of us. I'm excited to dust off some tunes that I haven't played for a long time too. These are going to be some fun shows."

"Right from the get-go, I admired Mike's songs. When we used to get together around the campfire to sing in the early days, we were always doing his songs," adds Dolenz. "We always had such a great a vocal blend; he was the one who encouraged me to write songs of my own. I've always been a big fan and now we finally get to do the Mike & Micky show that we riffed on back when we were shooting The Monkees."

A special VIP Soundcheck Package that includes one premium reserved ticket, access to the soundcheck, a signed hard copy of the tour book, early entry and one commemorative VIP laminate is currently on sale through Ticketmaster.

Reserved and lawn tickets go on sale at 10 a.m. on Friday.

The Cain Park Ticket Office opens for residents only on June 2 and for all others on June 5.