With Trampled by Turtles. Wednesday, January 18, at the Beachland Ballroom. 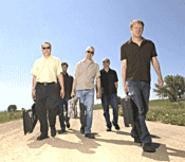 Returning after a 15-year hiatus -- during which leader David Lowery launched the far more successful Cracker (remember "Low"?) -- Camper Van Beethoven melded the quirkiness of its earlier incarnation with Cracker's pop sensibility and a newfound relevance on its 2004 comeback LP, New Roman Times.

Though CVB's offbeat music always harbored a political undercurrent, the band's latest album goes further; like Americanized The Wall, it expresses contempt for -- among other things -- our penchant for offering "assistance" where it's not welcomed. In this veiled parable, a young man joins an elite military unit, grows disillusioned, is discharged, enlists in an antigovernment militia, and becomes involved in the religious/ lifestyle war in occupied California. It's a funny, often sublime commentary that's matched by the band's effortlessly eclectic arrangements (abetted by Jonathan Segel's virtuoso violin), from the Ted Nugent-class stadium-rock ode to the folky, pedal-steel pop song "That Gum You Like (Is Back in Style)," to the gypsy/klezmer waltz "Might Makes Right." It's an impressively complete and focused work.