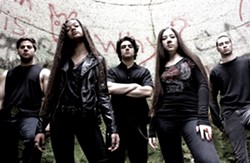 Courtesy of Motion Device
A hard rock band from Toronto, Motion Device has yet to play a show south of the Canadian border. Until now. The group is set to perform at Brothers Lounge on July 25 for what will be its U.S. debut. Thirteen-year old Sara Menoudakis leads the young group that also includes Sara's 18-year-old sister Andrea on 6-string bass and keys and her 16-year-old brother David on drums. The band also includes guitarists Josh Marrocco and Alex DeFrancesco, both of whom are 21.

The group formed back in 2008 and then christened itself Motion Device in 2010. It's built a fanbase on a grassroots level and its Youtube channel has over 7.3 million views and 39,000 subscribers. Earlier this year, they ran a 45-day crowdfunding campaign to finance the recording of their new album Eternalize, a collection of hard rock tunes that shows the influence of prog rock acts such as Rush and Dream Theater. According to a press release announcing the gig here, the band has two hours worth of material including covers, originals and acoustic songs that it will present at Brothers Lounge. The up-and-coming act counts Alice Cooper, Aerosmith's Steven Tyler, Evanescence's Amy Lee, Zakk Wylde, Halestorm's Lzzy Hale and Twisted Sister's Dee Snider as fans.