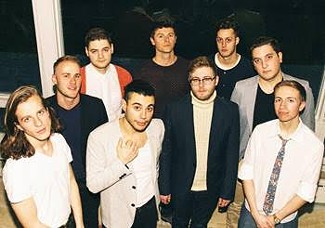 The nine members of the jazz/funk/groove act Busty and the Bass initially befriended one another during their first week at McGill University’s jazz school in Montreal and started jamming.

The band makes its Cleveland debut at 8 p.m. on Thursday at the Beachland Tavern.

“You know, the atmosphere was just a house party — we were all crammed into a living room, and just felt like jamming," Bevins continues. "We just felt compelled to play music that people would want to continue partying and dancing to. We were all in the jazz music program at McGill, so we were all sharing the same classes, and a bunch of us were in the same dorm, so it was only natural.”

As can be expected with such a large ensemble, the group takes inspiration from a variety of different sources.

“There are so many personal influences amongst the nine of us,” says Bevins. “But there are a lot of touchstones that we have in common. As far as R&B/soul/groove music, we all love D’Angelo. When it comes to more electronic based music, we really love [English singer-songwriter] James Blake. We can’t really say, ‘Oh, well there’s this band that has a lot of horns, and has a singer, but also a rapper, and also a bunch of keyboards, and blah blah blah’ that we can closely model it after. But there’s also some pretty important musical references from the ’70s and ’80s — some of Michael Jackson’s records, Earth, Wind, & Fire — stuff like that.”

On previous albums, the band recorded in the Busty Basement, a makeshift studio that doubled as a rehearsal space.

“A couple of our members are really into producing and home recording, so we’d slap together whatever mics we could find or borrow,” says Bevins. “It was good because we’d rehearse there, we’d finish up songs there, we’d record them, we’d edit them ourselves, stuff like that. It definitely contributed a real…I’m not sure quite how to put it…but a real ‘janky’ vibe, a very ‘do-it-yourself’ vibe to the music, which was pretty cool.”

For the new album coming out later this year, the band worked with Neal Pogue, a Grammy award-winning producer/mixer best known for his work with acts like Outkast, Snoop Dogg, Earth Wind and Fire, MIA, Nikki Minaj, Aretha Franklin and Lil Wayne. “Up Top,” the album’s first single, features breezy horns and a funky rhythm section; it simultaneously sounds vintage and contemporary.

“Given Neal's resume, we were pretty stunned and excited, and it was really a great experience from there,” says Bevins when asked about the recording experience. “He came up to Montreal for a couple days, and over the course of two days, we recorded two full songs. We didn’t sleep at all, but we had a really awesome experience working with him."

Bevins likens the band’s uptempo live shows to house parties. In fact, the group toured both Canada and Europe before it had even released an album.

“Well, the live show is really how we came together as a band,” he says. “That was the first thing that we would do — we wouldn’t rehearse, even. We would just play a bunch of shows for the first six months or so. It’s been a process of slowly figuring out what we like to do musically, and what we want the experience of the audience to be. A big part of that is just, you know, keeping the party going, and playing stuff that makes people want to dance, but also has enough surprises in it, musically, that it’s not just one experience for an hour. We really love taking the audience on a journey with our live show.”