Emanuel Wallace Photos
Carlos Jones and the PLUS Band performing at Flat Out Fridays at the East Bank of the Flats last August.
It's noon on a gray day in Cleveland and Carlos Jones is on the east side about to head out for a studio session. He says he's finally "upright and ready to talk." As one of the hardest working full-time musicians in Cleveland — Jones has been crafting heartfelt reggae music for 40 years — he's not the easiest to pin down. Still, he's eager to discuss his band's plans for its upcoming 4/20 show at the Grog Shop.

"So many people advocate and celebrate the herb, and I’m definitely for that," Jones says.

He's happy that marijuana legalization is closer to becoming a reality in this country — medical marijuana shops open in Ohio this fall — but he doesn't want the 4/20 celebration at the Grog Shop to be thought of in stereotypical fashion.

"I think everybody sees 4/20 as a big party day," Jones says. "People want to smoke freely and have a big party, and that’s okay, but it would be great if people would look deeper into it and say, 'You know, we want to celebrate cannabis as something that will be a benefit to people and not as much as a big free-for-all.'

"The medicinal and the spiritual element of it needs to be brought more to the light," he continues. "Herb has been used down through the ages, long before it ever took on any connotation about being a party thing and long before political reasons were used to keep people down."

The Grog Shop, which has hosted 4/20 celebration shows for years now, is a spot to which Jones says he's always happy to return. He says it's like the walls there have soaked up so much music that you can feel the vibrations walking in the door.

And playing his brand of infused reggae is everything to Jones. That's how he prefers to celebrate the 4/20 holiday, playing (in this instance with the group Jim Donovan and the Sun King Warriors). That's how he finds hope when the world seemingly turns to shit. As with his first band, First Light, and now the PLUS band, Jones puts together shows that feel like a celebration of life.

People of all backgrounds show up and dance for a couple hours together, basking in the sweat and the smoke. Jones says it all melds because reggae music is based on the heartbeat, something we're all intrinsically familiar. No matter how many gigs his band tackles, he says he never tires of the experience.

"Every time it feels special. That’s the amazing thing to me; it doesn’t get old," he says.
click to enlarge 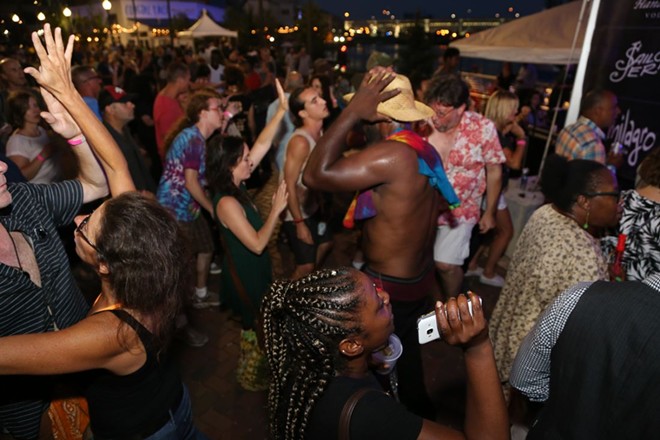 People coming together at a Carlos Jones and the PLUS Band show.

When he plays his guitar or bongos on stage, he often closes his eyes. He says in those moments it's like he's not even inside his body anymore. His band knows to follow; he says it's like riding a wave. Sometimes, Jones recalls the time he heard Bob Marley play back in the 1970s; that's when he was originally compelled to play reggae. Jones says he wants to keep the spirit of that music alive.

Now, with new songs in tow, Jones says he and the P.L.U.S. band plan to hit the studio soon before the summer season heats up and the performance schedule gets too hectic. In the meantime, they're readying for next Friday's show.

"There’s so much division between humans on the planet, and anytime we’re able to feel that oneness it's special," he says. "We can all have that fleeting moment, like an acid trip; we can have that thing where everything comes together. But here, you don't have to take acid; we can get this for free."