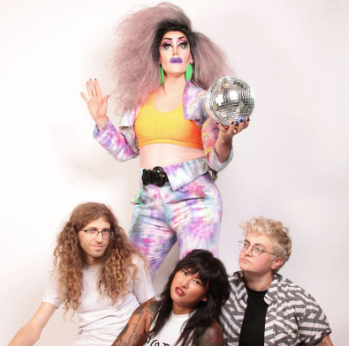 A Northeast Ohio native, Rage was in the Cleveland bands the Vermin, Interceptors, Vista Cruisers and Thunderthighs before moving to Chicago in 2008 and eventually launching a new chapter of her musical career with Bev Rage & the Drinks.

“I was always a punk rock kid,” says Rage, who grew up in Canton and went to college at Kent State University. Bev Rage & the Drinks perform with Slug Fest and Total Downer on Saturday, Sept. 24, at the Happy Dog. “I got involved in the local music scene in the early 2000s. I started playing in bands when I was 16 and even went on a tour. I was involved in the scene until I left in 2008. I was in four or five bands. This was back when the old Grog Shop was around. Things have changed, but I still have kept in touch with a lot of the music people there, and we try to make an annual trip there.”

After moving to the Windy City, Rage took a hiatus from music before forming Bev Rage & the Drinks in 2014. The band started playing shows in early 2016.

The group recorded and produced Exes & Hexes, a garage-pop affair that departs from the lo-fi sound for which the group is known, at Altered States with its owner, engineer/producer Brian Fox.

“We were a lot more lo-fi prior to this album,” says Rage. “We are still a little lo-fi, but this new album is leaps and bounds ahead of our other albums. We have two new members. They are both accomplished musicians, and our drummer is touring with a band on Alternative Tentacles. They’re called the Darts. She’s just an amazing drummer. We are lucky to have her.”

Exes & Hexes features album art by Mikaela Jane, a Chicago artist who has also worked with bands such as Against Me!, the Starting Line, Bartees Strange, Pup and Charley Bliss.

“She’s a local artist, and we try to use local artists with everything we do,” says Rage. “I got familiar with her through her other work. She’s worked with some other bigger punk bands. The artwork is really cool. The album is called Exes & Hexes, and we talk about the exes of the dating world and the hexes you have to overcome. The album cover image is my face with flowers and symbols in my hair. We were going with a witchcraft theme on this album. We did our research and consulted with people who are witches to know what flowers and symbols to pick. All the flowers and symbols are actually things that used within witchcraft rituals.”

With snotty vocals and loud guitars, the band takes on issues such as mental health (“Machines Get Cleaned), queer dating (“Confident”) and politics (“Attitude”).

“A lot of people know us as this funny, silly band,” says Rage. “That’s not where I come from as a songwriter. This one feels very formed in its content. There are still some jokes and funniness in there, but it’s peppered within these more serious songs, which are amplified by the fact that most of this was written during the pandemic. We were all going through a lot. These concepts don’t go away. Queer people wait a little while to figure out what we’re doing, so I write about overcoming mental health issues and trying to figure out how to date as a 36-year-old. It’s kind of a memoir in a sense. It’s about going through these issues and being a weird, queer musician in a big city. It’s just an all-encompassing album. We’re really proud of how the lyrics came out .”

Recently, the group has performed at some of the largest street festivals in Chicago, including Wicker Park Fest with the Spits and two of the largest LGBTQ+ Pride events in the city. The band has also kept true to its punk rock roots by playing at mainstay clubs like Sleeping Village, Beat Kitchen, Schubas and Liar’s Club.

“Depending on where we play, we alter what the live show looks like,” says Rage. “If we played the equivalent of the Grog Shop in Chicago, we might not bring all our props and fog machines. If we play a festival, we’ll bring all the props, but even with the club gigs, we don’t hold back. I’ll do a costume change. One the reasons I decided to form this band was because I would see these bands I liked and be bored by the live show. I don’t want anyone to be bored. I can promise you that nobody ever is.”