Who's that making the most refreshing sounds around? It's Kiddo, the happiest band in Cleveland. 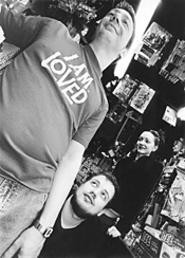 Even in the dark you can see Kiddo smiling. At La Cave du Vin, the candlelit Cleveland Heights wine bar where little more than silhouettes are discernible, the three members of Kiddo sip their drinks and playfully rib one another like schoolchildren, their grins more than implied by the perpetual giggling across the table.

"That's the whole Kiddo thing: being a kid, going out and playing with frogs," singer-guitarist Christian Doble says with a chuckle. "Then you go home, go to bed, wake up, and it's time to fish again."

With its unsinkable harmonies and candy-coated guitars, Kiddo is the most unabashedly jubilant band in Cleveland, a town where metal, punk, and hard rock historically get most of the attention. The band's effervescent vibe has led to a growing following in area clubs and a superb debut album that's set for release on a well-regarded indie imprint. So no wonder they're all so damn happy.

"I hated going to practices in other bands," says Doble, a native of Detroit who moved to Cleveland three years ago. "To this day, it's never been like that [with Kiddo]. I'll have a bad day, then I'll get together with these two, we'll play, and all of a sudden, I've forgotten about everything. It's been a really good feeling."

Kiddo's story begins in 2001, when Doble met Liz Wittman -- a petite dynamo who gained renown as the singer in modern rock favorites Tender Blindspot -- and began teaching her how to play bass. He then met drummer Greg Hyland at American Greetings, where both are graphic designers. Soon, the three were jamming with a handful of Doble's songs, a collection of savvy pop rooted in the rich melodies of the Mamas & the Papas and the Beach Boys.

"I think I just kind of grew up with it," Doble says of his pop pedigree. "My parents both sang. When I was little, my dad would record me. He had an old reel-to-reel, and I would make up songs about peeing my pants and stuff. I was apologizing to my family [for wetting myself]," he says, breaking into a pseudo-sad croon: 'I'm soooorrrry.'"

But where Doble's warm, vintage guitar tone and saccharine songwriting hark back to the '60s, Kiddo's sound is driven by Hyland's heavy drumming -- the songs' concrete anchor, born of his love for '80s metal and hard rock. (One of the first songs he remembers jamming to was Bad Company's "Can't Get Enough," and he spent a portion of the late '80s as a roadie for hair-metallers Pretty Vacant.) Blended with Wittman's infectious countermelodies and bouncing bass lines, it makes for a pretty remarkable blend of charm and punch.

And the sounds come together wonderfully on Kiddo, an album of 12 singles due out next week on Drive-In Records, the Michigan indie that's home to such pop favorites as the Saltines and the Lovesmiths. Kiddo is a whip-smart, fat-free disc awash in simple, sterling songcraft, its themes split between happiness and heartbreak. The jet-powered opener, "Woodward Avenue," sets a brisk pace with cruising guitars and backing vox worthy of the B-52's. Elsewhere, two-minute pop nuggets are sandwiched between more rollicking cuts like "New Year's Resolution Haircut," a 90-second foot-stomper that rides an almost honky-tonk beat, and the lovelorn "Still Not My Girl," which, with its multilayered melodies, veers toward do-wop. It all adds up to the kind of pop whimsy that don't come easy in these parts.

"I don't think Christian realized how special [Kiddo] was for this area, but I know I definitely realized it, because when we started playing, I was like 'Oh my God, they're going to hate us. We are going to get our asses kicked!'" Wittman says, recounting her initial confrontation with a live audience, her eyes the size of saucers. "But I never said that to him. I was just like 'Okay, let's see where this goes,' because I loved it, and I was having so much fun with it."

Kiddo's audiences are having fun too. The group built its following with well-matched opening gigs for pop greats like Imperial Teen and the Apples in Stereo, and even won over a crowd of old-school punks on a mismatched Peabody's bill last year (mohawked dudes were doing minuets by set's end). Theirs is a show polished and ready for road-testing; for now, though, love for their day jobs keeps Kiddo from leaving town.

"We're just kind of happy that we had a little dream, a little goal, and did something with it," Doble says of Kiddo. "We documented a really good time in all of our lives. Forever. This album will always remind us of when we met each other and all became really, really good friends and had the best time we've ever had."

"I think I'm a much happier person since Kiddo," Wittman says. "The brighter side of Cleveland came out."