Devotees have been waiting years for the new GNR album. 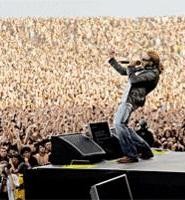 Axl Rose: Giving fans the finger for 15 years and counting.
Over the past 15 years, Axl Rose has done everything humanly possible to make hard-rock fans not give two shits about Guns N' Roses, a group that critics once anointed the new Rolling Stones.

Undeterred by Rose's long string of high-profile shenanigans, as well as the guy's inability to hold onto musicians, his fans keep holding out for that $15 million phantom, the much-talked-about but seldom-heard Chinese Democracy.

The reason for this is quite simple: 1987's Appetite for Destruction stands as one of the greatest rock albums of all time. So fans cling to the chance, however implausible, that Rose and some bunch of rockers calling themselves Guns N' Roses might again catch lightning in a bottle.

On the eve of GNR's November 24 concert at the Q (assuming the band doesn't cancel), we present you with a timeline, encapsulating how it all came to this:

Summer 1994: GNR's classic lineup records its last track, a flat cover of the Stones' "Sympathy for the Devil." Rose lays down two parallel vocals that don't complement each other, a studio trick suggesting a bipolar personality.

October 1996: Frustrated with Rose's domineering personality, Slash officially resigns, depriving the band of 50 percent of its cool and 100 percent of its top hats. When second drummer Matt Sorum speaks up for Mr. Top Hat, Rose fires him.

January 1997: Rose purchases sole ownership of the name Guns N' Roses. Legally, he can do -- or not do -- whatever he wishes with it.

August 1997: Bassist Duff McKagan quits, leaving Rose as the only original member. This is when we should have stopped caring.

November 2002: The band cancels the first date of the North American leg of its world tour; a riot ensues. But the group pushes ahead, eventually playing Cleveland's Gund Arena (now the Q). According to one concert attendee: "It felt more like watching a decent cover band than seeing the real GNR."

March 2004: Axl replaces Mr. Top Hat with Mr. KFC Bucket: Buckethead -- a man who lives in a chicken coop and wears a KFC bucket on his head -- joins the band. But he soon leaves, saying Rose is just too eccentric.

May 2006: Rose appears on the radio show Friday Night Rocks With Eddie Trunk, announcing that Chinese Democracy will be released this coming fall. We're waiting . . .

May 2006: Fracas No. 2 -- Rose and Tommy Hilfiger throw down at a New York nightclub. While Axl slapfights a fashion designer, fans continue to wait for Chinese Democracy.

September 2006: GNR warms up for its U.S. tour, playing Appetite in its near-entirety before a Las Vegas audience.

October 2006: The band cancels the first two shows of its North American tour. According to one promoter, Rose was busy "putting finishing touches on the album." "Better," a new GNR track, appears in Harley-Davidson commercials. Verdict: It's no "Mr. Brownstone."

November 2006: With a lineup that includes -- at least for now -- ex-Replacements bassist Tommy Stinson and former Psychedelic Furs drummer Frank Ferrer, Guns N' Roses cancels its Maine concert six hours before the show. Apparently, the band was worried about getting a $250 fine for drinking bottled alcohol onstage. Because when the reported cost of your unfinished album cracks $15 million, you gotta save money somewhere.