Chris Allen: Last full-band shows of the year this weekend 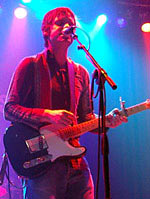 If you’re looking for something to do over July 4th weekend, you could do much worse than check out one of Cleveland’s finer roots-rock songwriters, Chris Allen, with his band the Guilty Hearts. According to Allen’s website, they will be playing their final full-band shows of the year at the Happy Dog (5801 Detroit Ave., 216.651.9474) Friday night and outside The Harp (4408 Detroit Ave., 216.939.0200) Saturday at 9:30 p.m. Friday’s show should be an extra special, as the quartet will be joined by Canton-based singer/songwriter/guitarist/producer Don Dixon, who produced Allen’s 2006 Goodbye Girl & the Big Apple Circus and last year’s Things Unbroken. They’ll play both Dixon’s and Allen’s material as well as new Guilty Hearts tunes and tunes from Allen’s old band Rosavelt. That show starts at 9 p.m. with a half hour set by Tom Lasby. After that, Allen still has a full summer schedule of solo shows at venues such as the Harp, Flannery’s and Tremont’s Southside, if you want to hear what he’s working on. — Anastasia Pantsios