With the Whiskeyhounds. Wednesday, May 14, at the Beachland Ballroom. 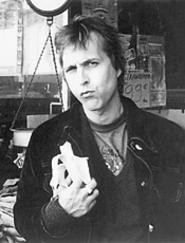 Chuck Prophet
"Americana" is to musical classification what "miscellaneous" is to office filing systems. Don't know what to call an eclectic artist? Put him/her in with the Americana stuff.

Which is where Chuck Prophet is often lumped. True enough, the man is certainly eclectic. His heroes and influences are many and varied. His first band, the '80s California cult conglomerate Green on Red (still a huge phenomenon in the U.K.), was Drugstore Cowboy stuff, but Prophet has advanced from the Son of Gram Parsons approach. His sixth and most recent solo CD, No Other Love, is a true sonic grab bag. Rock, blues, jazz, world music, folk -- all here. Think Los Lobos without the Mexican accent. Prophet's lyrical influences are a little narrower. Dylan, Waits, and Lucinda Williams echo through his songs, proving that this is one Prophet who's not at a loss for words.