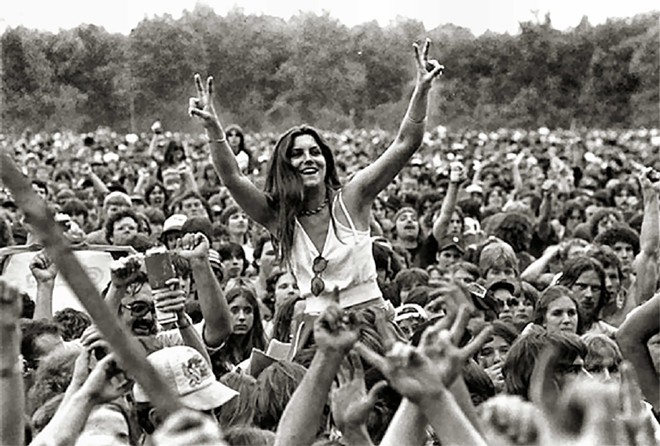 Photo via Wikimedia Commons
The other night, I saw Santana in concert at Blossom and was mesmerized by his masterful covers of songs he played at Woodstock 50 years earlier. Powerful images and videos flashed at the audience as if time had frozen.

Being an alumnus of the original three days of peace and music, I momentarily beamed back to a memorable but hazy part of my life, three days where my generation shredded the angst of the 60's and experienced a oneness of connection to hope. Maybe chalk it up to the psychedelic drugs, but at my advanced age, in my own nostalgic way, I would love to take a time machine back to those magical times. On the other hand, I want to leave it to history.

I feel that there should be only one Woodstock, and no other imitations. It was a one-shot deal, a confluence of cultural and political energy wrapped up in the exigencies of the particular moment. It cannot, nor should not, be recreated as many promoters, including Michael Lang from the original event, tried to pull off this year, with predicable failure. I would prefer to watch a re-run of the movie. I could point out to my kids and friends how Richie Havens reached our souls with the stirring rendition of “Freedom.”

When I look back at Woodstock, I achieve a momentary respite from the chronic cynicism wrought on me from years of dealing with a disturbed social order and an incompetent political system. But it doesn't matter that the idealistic dreams once felt to be within reach have eluded us. While we have enjoyed some progressive moments like the election of Obama, when a new hope resonated in American politics, we have also inherited a legacy of urban chaos, insidious racism, paranoia, intolerance for human differences, and sharper economic disparities, especially in the age of Trump. What really matters is that the experience at Yasgur's farm was also about the joy of possibilities. And when you've entered that realm, it has a way of staying with you.

The mass movement of youth made it a cultural phenomenon. I will never forget the emerging scene on the New York Thruway. At least five miles before the exit, vehicles of all types were parked on the median strip. And that was Thursday afternoon, a day before the first performance. Once on the two-lane road (17B) leading to the site, a psychedelic parade of multicolored vans, school buses and counter-cultural foot soldiers — a generational procession — inched its way to the rock and roll Mecca.

We soon realized that this was not going to be your average outdoor concert. The gate and fences were torn down, and as history has noted, it became a free concert. I was one of the few who actually purchased the eighteen-dollar admission ticket, which made me feel like a traitor to the cause. Once inside, there was a gradual formation of a tribal community, with a unique structure poised to keep a half a million people from either starving, getting disease or killing each other. Food and water were flown in, and free clinics were established. We were advised which drugs to ingest and which to not. Even the locals, predisposed to stop the concert, opened up to the strange happenings in their sleepy town.

No other concert since — and I've been to hundreds — could match the spiritual energy lifting us. Woodstock transformed into the promised land of the 60's and beyond, where anyone who was at all moved by the music, politics and culture of the decade was welcome. It was a time to take a look around, and assess ourselves — the student activists, the nature freaks, the Vietnam veterans, the Gay and Lesbians, the Buddhists, and of course the rockers — and lay claim to our rightful place in the American landscape. And beyond that, it was the party of the century! And without battalions of cops, ridiculous rules, and throngs of drunken punks making you wish you'd stayed home.

People ask me what my most profound memory of Woodstock is. It is waking up on the last morning under a friend’s car, the sun creeping through a humid haze, part fog, part marijuana. In the distance, I heard the strange screeching of a guitar, which made no sense and yet a lot of sense at the same time. It was Jimi Hendrix playing his haunting and prophetic version of the "Star Spangled Banner." I was never the same after that.