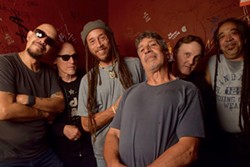 Courtesy of Chris Dunmore
Formed in 1984 by members of the local reggae band I-Tal, First Light quickly became a staple on the local reggae scene. The band adroitly mixed reggae with rock, soul and other sounds as it played both original material and classic rock, pop and reggae tunes. It had a loyal local following prior to breaking up in 1998.

On Nov. 25, the group will reunite to play House of Blues and celebrate the 30th anniversary of its first album, Meltdown, reportedly one of the best-selling albums ever issued by a local band.

Tickets are $25 in advance, $30 at the door. A limited number of $50 VIP tickets are also available. Those tickets include an autographed copy of the original Meltdown CD, a CD of live board recordings from back in the day and a packet of flyers from some of the band’s shows.