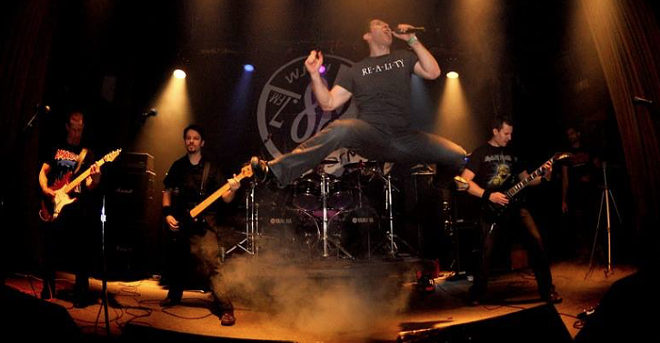 Joe Kleon
Local rockers Alternate Reality.
Steve Delchin, who works as an attorney for a local firm, and his Alternate Reality bandmates — guitarist Jon Engeman, drummer Bob "Savage" Schwartz, guitarist Bob Delchin and bassist Nick Crow  brother, guitarist Bob Delchin — became a sensation several years ago when he and the band released a campy music video for the tune "The King That Never Was." The video went viral (Yahoo crowned it "The Most Epically Awful Video of 2011") and has amassed around one million views on YouTube.

Now, the group has released an ambitious new music video for its latest single, “Project Wormhole.” The video was filmed over a five-year period and features more than 150 actors.

Delchin once again directed, edited and produced the video, which features a rare version of the famous DMC DeLorean sports car made famous in Back to the Future.

“The heavy metal scene has so many great genres and themes, and I wanted to explore all of them in a single video,” says Delchin in a press release. “‘Project Wormhole’ features prehistoric characters, Egyptians, Roman gladiators, Vikings, Medieval warriors, pirates, Civil War soldiers and even zombies.”