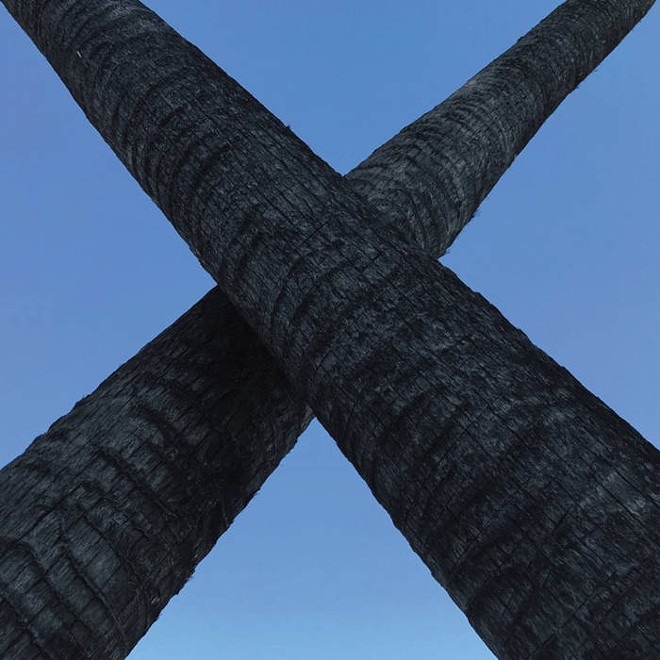 Courtesy of Greg Wooten
Cover art for the debut from 1X4X9.
Several years ago, renowned designer, collector and musician Gregory Wooten stopped in at Blue Arrow Records to peruse the Collinwood record store’s terrific vinyl collection. A former Clevelander, Wooten was visiting his parents and decided to take a day to dig for albums. At the time, he had built up what he calls a “crazy collection” of defaced album covers and was about to publish the book Marred for Life!: Defaced Record Covers from the Collection of Gregory Wooten. He was looking to add to it and asked Blue Arrow owner Pete Gulyas if he had anything "squirreled away."

“He had a box in the back, and it completely blew my mind,” says Wooten via phone. “At that point, I had about 1,000 defaced albums. I was bugging out because Pete had so many great ones. They weren’t for sale, but I couldn’t resist asking him if I could get just one. I said I would send him a copy of my book in exchange. I picked out an amazing In the Court of the Crimson King album that was altered with all these great colors added.”

Wooten subsequently became friends with both Pete and his wife Debbie. So when he started working on a new collaborative musical project featuring original compositions by a project he dubbed 1X4X9, the Gulyases expressed an interest in releasing the group's debut album on vinyl through their Blue Arrow Records label.

“They’ve been a complete joy to deal with,” says Wooten. “Doing Leaving as a double LP feels a little Spinal Tap to me, but it kind of needed to be a double album, and they were cool with it. The packaging is really nice, and they’re been so awesome. I’m really grateful to have them as the people behind this material.”

The band formed during the pandemic when Wooten began writing songs during lockdown and sending them to John Papa, a Cleveland musician.

“I found an Instagram post of John’s — he’s a bass player like me, and we rarely played together in bands over the years because we both played the same instrument — where he said he would love to play bass on some tracks if anyone was working on anything," says Wooten. "I was messing around with some ideas and just sent him some tracks. We started bouncing tracks back and forth. Fast forward, the band naturally evolved into this experiment. I think there are 12 musicians on the record. Having played in bands all these years, it was different to do this thing remotely. For each track, I just encouraged people with a little bit of direction, but I ultimately let them make it their own. It just bloomed into this really big collective.”

The 23-track album opens with “Gabriel,” a somber instrumental tune that features sharp percussion, undulating synths and soft vocals. The last three tracks function as if they're a trilogy. Those tunes reference the passing of both Wooten’s mother and father.

“It’s not in a morbid way,” says Wooten in explaining the album's final three songs. “It’s more spiritual. There’s a lot of loss tied to this record, and it's about the experience of ‘leaving.’ It’s all balanced out by the healing power of music and collaborating with awesome, creative people.”

While some songs have a light industrial feel, horns bring a jazz sensibility to tunes such as “Belly” and “The Deep End.” Sam Phipps of Oingo Boingo fame even plays saxophone on one song.

“I ask people what the music reminds them of, and I’m always interested in what people hear,” says Wooten. “Clearly, I’m a big fan of Daniel Lanois and Talk Talk, and I like that experimental, vaguely electronic music, but I also listen to a lot of jazz. Because I like experimental music, I was open to all sounds. The whole basket of sounds was opened up for this. That’s part of what I’m most happy about. I often describe it as the soundtrack for the last couple of years of my life, and it really feels like that. The different instrumentation added some texture to it.”

Initially, Wooten’s father taught him to play bass when he was in his teens. Growing up in Cleveland, he absorbed classic rock and prog rock before eventually joining the New Wave band Slam Bamboo in the late ’80s. That group that famously featured a then-unknown Trent Reznor on keyboards.

“I was a complete Led Zeppelin fan,” says Wooten. “I came up through the ‘70s rock scene. It was a great time to be going to shows. I got to meet [Zeppelin bassist] John Paul Jones in the basement of Record Revolution. I was going to see Zeppelin play in town and was at Record Revolution. I should have been looking for Sun Ra records, but I was at the store buying Foghat records, unfortunately. They locked up the store up because some members of Led Zeppelin were coming in. I stayed and got to meet John Paul Jones. I remember that I said to him, ‘It’s so great to meet you. The bass part to “Ramble On” is amazing.’”

In the late ‘90s, Wooten moved from Cleveland to New York and then Los Angeles to pursue a career in design.

“It was great to move to New York and build a new business and put music to the side for a while to focus on something I could make a living at,” he says. “I have so many musician buddies who didn’t make it, and I was blessed to find another creative endeavor that I love and can survive on. And now, here I am, and it all has come full circle.”

Currently at work on a new 1X4X9 album, Wooten has recruited former Cleveland bandmates such as guitarist Tim Kirker, singer-multi-instrumentalist Andy Kubiszewski and bassist Sean Beavan as well as most of the contributors from Leaving as the collaborative musical experiment continues to evolve.
Coming soon: Cleveland Scene Daily newsletter. We’ll send you a handful of interesting Cleveland stories every morning. Subscribe now to not miss a thing. Follow us: Google News | NewsBreak | Instagram | Facebook | Twitter