Concerts will celebrate 20th anniversary of 'The Impossibility of Reason' 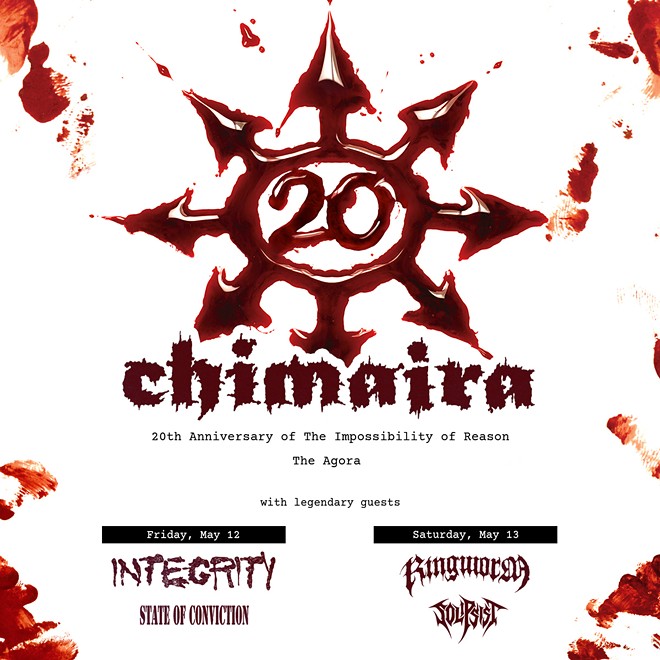 Courtesy of the Agora
Shortly after forming in 1998, local metal band Chimaira signed a deal with Roadrunner Records that effectively launched the group's career. It achieved national and international fame with 2003's The Impossibility of Reason, an album that’s every bit as heavy as anything by Slayer or Metallica.

The group was on Ozzfest in 2003 and joined the European Road Rage tour that same year. Even after parting ways with Roadrunner in 2006, the band was still a major draw on the metal circuit and its albums still sold well.

The group has just announced it'll reunited in 2023 for a two-night stand on May 12 and 13 at the Agora. The shows will celebrate the 20th anniversary of The Impossibility of Reason. Integrity and State of Conviction will open the first night; Ringworm and Solipsist will join the bill on the second night.

An artist presale for the Chimaira concerts at the Agora begins today at 10 a.m. with the code TIOR20. Tickets go on sale to the general public at 10 a.m. on Friday.  Coming soon: Cleveland Scene Daily newsletter. We’ll send you a handful of interesting Cleveland stories every morning. Subscribe now to not miss a thing. Follow us: Google News | NewsBreak | Instagram | Facebook | Twitter