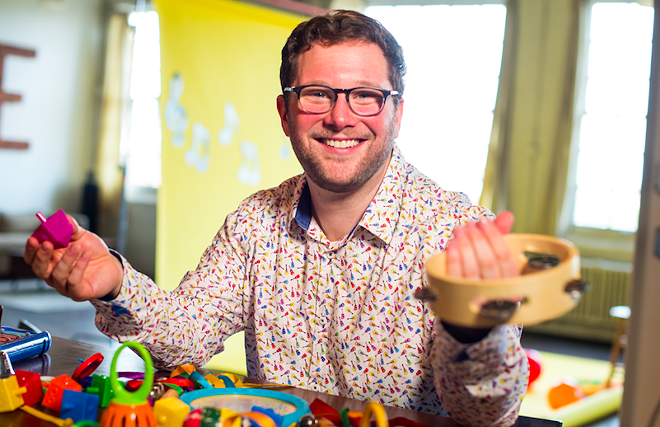 Courtesy of Jesse Friedberg
Jesse Friedberg.
Local singer-songwriter Jesse Friedberg graduated from Berklee College of Music with a major in songwriting. While he played in indie rock bands locally for a number of years, he’s also written and recorded kids music as Jesse Jukebox.

Friedberg has taught interactive early childhood music classes in Ohio City, at the Mandel JCC in Beachwood, and at synagogues and preschools throughout the greater Cleveland area. He's also worked with inner city kids in the Notes for Notes program at the Boys & Girls Clubs of Cleveland.

Now, he’s set to release his fourth kids’ album, Just A Minute, on Friday, Sept. 2. This time, there’s a catch. Every song on the album clocks in at just about a minute in length.

“I have always wanted to make an album full of one-minute songs,” says Friedberg in a press release. “At first, I was daunted by the limitations of writing fully fleshed out songs while keeping them small and digestible. I reminded myself that limitations and finding ways to work around them inspire creativity. Every track was a new opportunity to problem solve."

That said, he says the album is still as "silly" and "weird" as anything else he's recorded as Jesse Jukebox.

"The weirdest thing about ‘weird’ is the stigma occasionally attached to it," he says. "Weird makes you unique! That’s why I have a song on the album called ‘Weird,’ which I placed after a slew of goofy songs. It’s to remind kids that being ‘weird’ is not a negative; it’s a worthy attribute. The song wraps up with the observation, ‘it’s also ok to be normal, but what’s normal, anyway?’”

Friedberg began taking piano lessons at age 7 and picked up the guitar when he was 14. At 16, he acquired a Fender Telecaster and realized he wanted to be just like Who guitarist Pete Townshend.

“I taught myself to play all Who songs," he says. "It was quite an epiphany when I realized that Pete [Townshend] wrote all the songs himself, so, naturally, I started writing my own songs. From that point on, I was completely obsessed with music.”

In 2012, Friedberg recorded a children’s album titled Jesse’s Jukebox with locally based multi-platinum-award-winning producer Michael Seifert. In 2017, he released a follow up: Jesse’s Jukebox: There’s Music Everywhere. Two years ago, he issued his third album, Awesome!, which he recorded with Grammy-winning producer Dean Jones, who also produced Just A Minute.

Friedberg, who has a master's degree in early childhood education from Ursuline College, says listeners will understand his music if they "think of all those performers getting together to form a kids’ band and then bringing on Weird Al Yankovic and Jack Black."

Just a Minute will be available to purchase digitally via Bandcamp and available to stream on all streaming platforms.