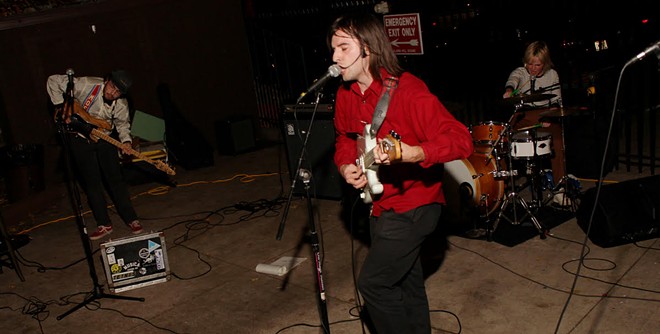 Language has just announced that it’ll release its self-titled debut LP on Friday. The band recorded the album live to tape in a single day at the Electric Company in Akron.

“The record is filled with fuzzed out guitars and fury from beginning to end while King's lyrics paint images of seven-headed dragons, Stanley Kubrick, and an inescapable, never-ending flood of content," reads a press release about the album. "But beneath the grit of these nine songs, Language demonstrates a love for melody, head-bobbing grooves, and hope for the future—at least as far as rock 'n' roll in Cleveland is concerned.

This past July, the band performed the song “Cut Teeth” off the record for a live session with EarthQuaker Devices.

Language will play a release party with Red Devil Ryders and Moth Cock at 9 p.m. on Friday at the Happy Dog.
Coming soon: Cleveland Scene Daily newsletter. We’ll send you a handful of interesting Cleveland stories every morning. Subscribe now to not miss a thing. Follow us: Google News | NewsBreak | Instagram | Facebook | Twitter