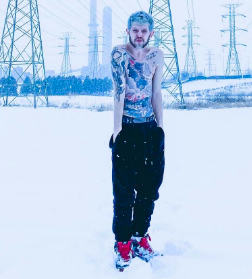 Courtesy of Skuff Micksun
Local Skuff Micksun.
A Cleveland native who returned to town after seven years in Chicago, Skuff Micksun has just released a music video for his new single, “Magnificent.”

“I just started putting words down, not necessarily in any rhythm or with the intention of a song but just to get something out,” says Micksun when asked about the inspiration for the boisterous track. “When I read what I had written down, I realized I’d captured what I was feeling in that moment on paper and ran to my keyboard to write the music. Then, came the chorus which just felt like something a lot of people I know could relate to, including myself.”

The accompanying music video finds him performing in a crowded club and from atop a living room table.

“The video is just letting loose in your house honestly,” he says. “I felt like it was just an honest, relatable video.  Daydreaming in your house about performing A song to a crowd and having a sense of humor which is a crucial message of the song. Life is hard. No doubt about it. Ya gotta laugh! It’s the best medicine.”