Race to the Blackout (Morphius) 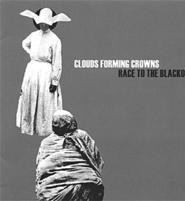 Clouds Forming Crowns play barroom rock that deserves an arena-sized stage and PA system. Their M.O. recalls Guided by Voices, and with good reason: Writer-singer-guitarist Tim Tobias cut his teeth with the retro-rock heroes, and brother/producer-multi-instrumentalist Todd Tobias produced some of GBV's most notable material. Live, the group kicks out the jams as a quartet, but in the studio, it's just the brothers Tobias, playing big, fat rock and roll. With a low end that can rock your clothes off, the fuzzed-out opener "Phantom Dog Black Water" could give rawk sensation Wolfmother a run for its money.

The expertly jagged mix makes the disc impossible to play quietly, but broken-amps hot licks account for only half the group's tricks. "Matter of Choice" finds Tim going all Dylan, exhaling strained poetry over acoustic strumming. In the virtual Who tribute "Ghost Looms," he floats a sneering melody like glam-era Bowie shot full of testosterone. With GBV RIP, it's only a matter of time until the coronation of the Crowns.