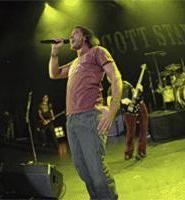 "We signed Encoder because they have an addictive sound with great dancey beats and excellent vocals, with nice variety and production in the sound," says DSBP owner Tommy T. "They work hard to promote their music."

DSBP is a worldwide label and distributor known for low prices; it has additional distribution through major industrial outlets such as Metropolis. Tommy T says the label will issue 500 copies of the initial pressing, with support from radio, clubs, internet, and street teams.

Tentatively titled Supernatural, the disc features dark dance-floor electronica, with an impressive list of star genre remixers and guests including Flesh Field, Interface, Terrorfakt, and Razed in Black's Romell Regulacio (who contributes vocals to two mixes of future-pop anthem "November"). The band has no plans to play live, but is sponsoring a contest to find a guest vocalist. Interested singers can record and submit a vocal to an instrumental track from the disc. The winning submission will appear on an upcoming DSBP compilation.

"I've known Tommy for years, and he's known in the industrial scene for being an honest label owner and a die-hard supporter of independent bands," says Carter.

· Cleveland rock royalty Cobra Verde is working on its long-awaited original follow-up to 2003's modern classic Easy Listening. Singer-guitarist John Petkovic says, "I want to call it Background/Foreground, since all the tunes will have two things going on simultaneously. Not sure how it compares to Easy Listening. It's all over the map, though. Hopefully [it will be ready] by fall '06."

· Former Pride of Ohio frontman Nick Wolff has a new band, Nick Wolff & the Homosexual Mannerismz, which continues his ex-band's legacy of shticky, grimy punk, including the ode to Billy Morris, "I Wanna Be in Warrant." Check out audio at www.myspace.com/thehomosexualmannerismz.

· Rubber City Records CEO Clint Bott says that the long-overdue Pricks anthology is still in the works, but the '90s punks' master tapes weren't stored well, so the remastering process is going slowly.

· Dave Mansbach and Ron Tucker of electronic-rock soundscapists Infinite Number of Sounds are in the process of tracking the debut project of their To Box With Man project. Mansbach is also assembling another INS project under the alias NemoNemon.

· Playhouse Square will host two educational hip-hop events this summer. The week of August 18, ISH, a multidisciplinary hip-hop company from Amsterdam, will host a weeklong day camp, during which teens and local artists will assemble a production showcasing every element of hip-hop. In August, Hip-Hop With Progressive Arts Alliance will present an adult seminar about rhyming and hip-hop culture. For more information about both events, go to www.playhousesquare.com.