Coldplay Put on a Joyous, Colorful Show Last Night at the Q 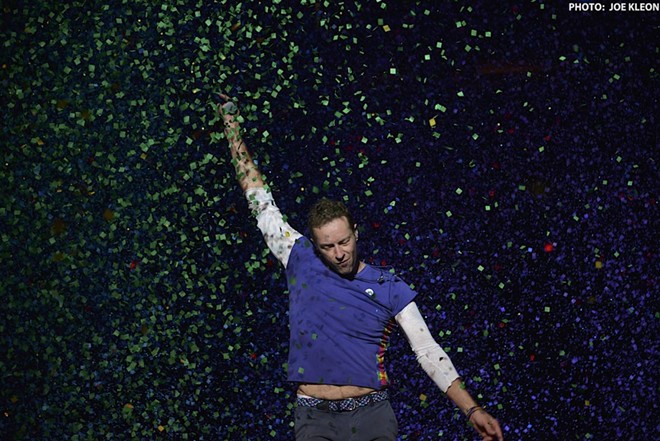 Chris Martin's voice was coming from somewhere. He wasn't on the main stage or the end of the walkway that went into the audience. Finally, I located the Coldplay frontman's body. There he was sprawled out at the start of the walkway, slowly singing "Fix You" while looking up at the ceiling, as if Quicken Loans Arena was his personal bedroom.

And that wasn't his only floor work of the evening. At the end of their big hit "Hymn for the Weekend," which came out on 2015's A Head Full of Dreams and is possibly the British band's most pandering tune, Martin straight up rolled around in a pile of paper confetti.

If anything, last night's show proved that Martin is one of the biggest hams on the planet. When he wasn't rocking at the piano, he was out marching or frolicking or spinning up and down the stage. He's that guy who can't actually dance but anytime he's out at a club he gets the crowd going.

And all of this fun dorkiness works to the band's advantage.

This is a group that has stayed together for 20 years by making pop-rock music that appeals to a large audience. Parents and teens alike were seen swaying and jumping together at last night's feast for the senses. Even those who were probably dragged by a girlfriend or parent, couldn't help but get sucked into the madness.

When there wasn't confetti spraying out in rainbow hues, there were fireballs going off in the back and big balloons dropping from above. The light show was blindingly enthralling and the backdrop videos dizzying. Audience members were even given lightup bracelets to wave around during the performance. If it was all too much, no one seemed to care.

At one point, Martin actually stopped in the middle of "Charlie Brown" to get the crowd to put down their cell phones, let go of their inhibitions and jump around.

"Goodness knows I've made a career out of jumping up and down like an idiot," he said.

While the show's visual quality was front and center, the band's full and joyous sound was commanding (if not a little too perfectly produced). These anthems were meant for an arena, and over the span of two hours the band wanted to play them all for us. That they played "Yellow" as the second song and "The Scientist" two tunes later just proved how much the show was for the fans.

The finale put the four-piece out on a platform at the back of the arena, to the delight of fans. They played more intimate songs like "In My Place" and "Don't Panic."

The most telling part of the show, was that the filled-to-the-brim crowd didn't start trickling out early. Most folks remained glued to their seats (not that anyone was sitting in them). People wanted to see what Martin and crew would do next. They wanted to stay to the end.