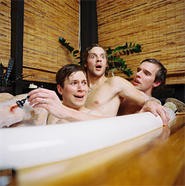 Menomena's unique software has brought them closer together.
The brave new digital world has thrown the very act of music-making into flux. But while advances in software yield increasingly more intricate soundscapes, the skilled hands of artists like Photek, Four Tet, and Girl Talk have infused their meticulously complex compositions with a surprising warmth and crispness.

Like the aforementioned musicians, the Portland trio Menomena makes totally engaging music that doesn't call attention to how it was created. It's like Frankenstein's monster without the telltale seams and neck-bolt. On Friend and Foe, Menomena's sophomore LP, the group's sound is chaotic, with plenty of blind curves, sudden declinations, and winding switchbacks. "Air Aid" opens with somber piano before a clattering, thumping rhythm section arrives, as if someone screamed "Hey, Kool-Aid!" "Wet and Rusting," meanwhile, is structured around an enduring melody (passed from the piano to a hiccuping guitar riff and back), with the instrumentation making more entrances and exits than Britney in rehab.

Pulling back the curtain on the band's creative process reveals a surprise worthy of Oz. Even a Menomena fanatic like me initially struggled to grasp what it is the group does, let alone why it has chosen such a strangely convoluted working process. Maybe it's their art-school backgrounds that provoked them to create in such an idiosyncratic manner. Regardless, picking apart the how behind the loops used to make their music is far more interesting than understanding the why.

An initial recording session involves three multi-instrumentalists/songwriters -- Danny Seim, Justin Harris, and Brent Knopf -- packed inside their little home studio. There, they take turns plugging their instruments into a computer program designed by Knopf. This allows them to record and layer these short loops -- or tracks, essentially. One after another is created in an improvisational manner, with each member then returning home to construct their own songs from the raw material, still using Knopf's software. By limiting each musician's contribution to just a few measures (all in the same key), the band ensures everything is interchangeable. This allows them to construct and redesign tracks as easily as giving Mr. Potato Head a makeover.

"Danny might record, say, four drumbeats. And we'll have the option of deciding which one we want to loop back for us. When we choose one that we want to be looping back, it will take center stage, and then Justin will put on headphones with Danny's drumbeat in his ears. And he might record four different basslines," explains Knopf, shedding further light on the typical Menomena recording session. "Then the process repeats. I put on headphones and choose one of Justin's five basslines, and I play something on guitar on top of that. Then Danny plays something on glockenspiel, Justin plays something on saxophone, and then I play something on trombone or whatever. We just keep passing the mike and passing the headphones. Just adding layers. When we're done, we'll have 15 to 20 different musical ideas in sound files."

While creating the loops is a collective endeavor, the act of producing actual songs is a solitary one; there's no telling what each musician will use after he returns home. Nor do they have to convince the others to go along with their ideas until they present a finished product. Although Knopf does hint at the potential for conflict when he says, "We're all perfectionists," this flexible process offers all of them the availability of a full band as well as the self-directed nature of solo recording.

Knopf admits the wealth of possibilities can be a little daunting; there's the method's open-ended nature, abundance of archived sound files, countless software tools, as well as all the real-world instruments sitting at his fingertips. But one thing Knopf particularly likes about this method -- and credits some of the band's success to -- is the way it separates the editorial and creative sides of the musical equation. He doesn't have to think about how his part will fit within a song; he can just respond creatively to the loop. "You can always splice them and reposition them," says Knopf. "It's like spelunking without a flashlight. You're trying to go where it smells good or feels right. Anything goes."

Well, not quite anything. Each completed tune still has to pass muster with the rest of the band. "I had like three false starts to that song ["Wet and Rusting"]," Knopf recalls. "They hated it. Tried something else. They hated it. Tried another thing. They hated it, but I said, 'Fuck you' and kept going, and that became a song."

With three different songwriters and such an unusual working style, the results could be quite strange, but instead feel united by an aesthetic that's hard to put in a box. There's a majesty to the sound that comes less from the sheer number of layers (as with a chamber-pop act) and more from the quickly changing musical storyline. While sometimes animated by funky undercurrents, Menomena's music is primarily driven by warm, shambling atmospheres reminiscent of early Pink Floyd, but full of the subtle sonic touches and expansive instrumentation you might expect of King Crimson.

The band has tried to write together instead of through its usual quasi-solo process, but brief attempts haven't produced much fruit. It's a shame, really, because the process of each of them learning these songs for the first time, so they can play them live, is almost as involved as creating them -- can you imagine?

"Depending on how you look at it, you can say that this is working for us and not to worry about it -- or you could say that we're just lazy, and we keep putting off the hard decisions of . . . what the parts are going to be and then sticking to them," says Knopf with a laugh. "We could be learning them together and then recording whatever that is, instead of the other way around. It depends on how you look at it. I guess we choose to pay later."