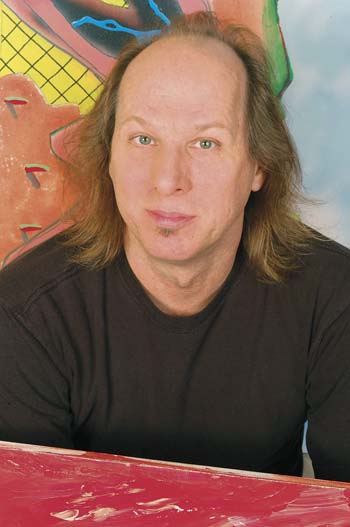 Adrian Belew is out on the road again — this time with friends. Adding Eric (drums) and Julie Slick (bass) to form the Adrian Belew Power Trio in May 2006, Belew's take on funk/boogie has never sounded better. Five cities into their fifth tour in three years, the Trio have the energy and chops of a more veteran band.

There were some technical difficulties, though. Midway through the nostalgic opener, “Big Electric Cat,” Belew’s gear went dead and he had to come up with new ways to entertain the crowd, throwing a few dance moves into the mix.

Supporting their new album e, Belew and the Slick siblings flowed as easily as cold beer on a hot day. They played two songs from the new album, “a” and “b” (guess what the rest are titled), which, on the whole, sound like exercises in musical technique and jazz-funk.

One of the featured techniques was Belew's much-celebrated “playing with himself,” where he records himself performing measures and then looping them back again as new creative sections. This musical onanism made the simple trio sound much bigger than they were. Especially enthralling was Julie's bass playing, which were put to the test on Belew's old King Crimson bandmate Tony Levin’s complex parts.

After playing with Talking Heads, Frank Zappa and Nine Inch Nails, Belew's electro-funk soundscape seems more musically pure. He performed with the intensity of the younger greats, not someone coming up on his 60th birthday. He slipped easily into King Crimson's “Dinosaur” and “Young Lions,” throwing on the gas after “Neurotica” into “Of Bow and Drum.” The core set finished with another track off the new album, this one called “e,” a wonderfully calibrated road boogie.

An encore of the eminently jammable “Futurevision” capped the 105-minute set.

Local jazz-funk trio Cuda, Renko, & Cuda — manned by Chris Cuda (guitar), Steve Renko (drums) and Tony Cuda (bass) — opened and, for the most part, kept the audience entertained. Sounding like a incoherent mix between Dream Theater and Joe Satriani, they displayed a technical knowledge of boogie but weren’t quite polished. Their strongest number was their last: "Safari," a sprawling, polyphonic, quadra-signature opus. —Gerard Nielsen