Concert Review: Bad Veins and the Eulogies at the Beachland Tavern, 4/4 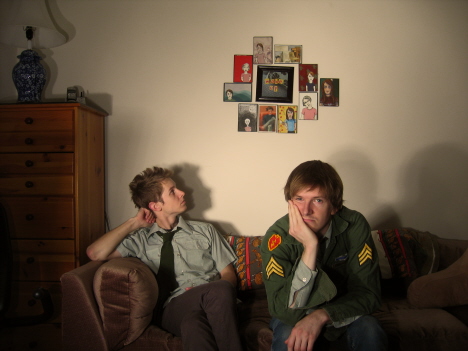 It’s not unusual for an opener to eclipse a headliner, but Saturday night at the Beachland Tavern, the Eulogies backed an interesting but weaker Bad Veins. Someone at their shared record label, Dangerbird, must not be paying attention.

The Eulogies’ set list was 11 songs strong, including cuts from their first self-titled album to Here Anonymous, which was available a few days shy of its official release date. Even after the near-LP length set, the crowd was ready for more.

The band’s new bassist, Garrett Deloian, truly rocked. I can’t help but wonder how they sounded before his strong influence. Singer Peter Walker donned a fedora and sang, “You’re like a bad connection that I want to fix.” In keeping with their somewhat morbid theme, a slide projector pointed at the drum set flashed grainy photos of everything from young women in bathing suits to men in decades-old military uniforms.

Before their set, Bad Veins’ Ben Davis rigged the stage with a reel-to-reel, a synthesizer that he touched once during their seven short songs and old olive phone with a spiral cord that clotheslined between his mic stand and a wooden box. Once finished with his maze onstage, he called for a potty break through the mic and disappeared.

The phone gave Davis’ vocals a far-away and distorted sound, but no one was paying attention to Davis after Sebastian Schultz sat down at his drums. Schultz was arguably the best musician of the night, pounding out the beats with such precision and energy that every man and woman in the crowd turned into impromptu head bangers. The band played along to the reel-to-reel, but I doubt anything would’ve been lost (besides maybe a kooky military march) without it. —Crystal Culler