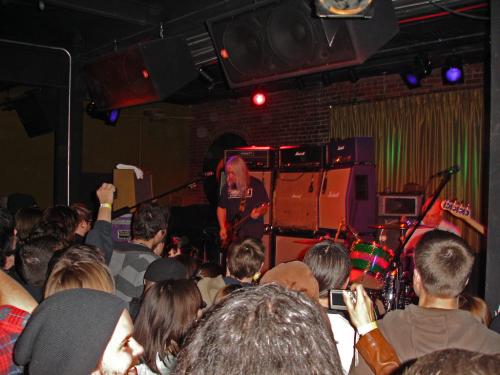 Last night, the Rubber City was treated to three 100-watt amplified stacks of pure sonic gold courtesy of a reunited Dinosaur Jr. A couple years ago, the original trio coat-checked their sensitivity (bassist Lou Barlow) and skate films (guitarist Jay Mascis) and got back together after a nearly two-decade split.

Road-testing new material from their upcoming album Farm (which comes out in June), Mascis, Barlow and drummer Murph are on a 28-date tour of small clubs. They played a sold-out show at Akron's Musica last night.

Needless to say, there was a buzz about this show ever since it was announced in late February. So what does anyone in my situation do when he has the opportunity to see Dinosaur Jr. in a cozy, intimate 300-person venue? Get stoned, show up late and pull an oblique maneuvering through the crowd toward the back porch of the venue to get some much-needed elbow room.

With help from Steve Clements, who plays keys and drums for Akron rockers Houseguest, I was able to somewhat accurately put together songs I thought I was hearing (Dino are one of the loudest bands on the planet; in a club this size, the volume was deafening): "Little Fury Things," "Freak Scene," "Feel the Pain," "Out There," "In a Jar" and a few off the new album that nobody knew.

Oh, and they might have covered Devo. Lesson learned: If you're reviewing a show, don’t get too high to do your job. Still, the show was loud and rocking. It’s not often a venue like this hires a second sound man to simply watch the first sound man — just to make sure the PA doesn’t blow. —Colt Sanders