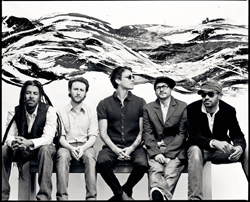 Incubus' concert last night filled Time Warner Cable Amphitheater with high-schoolers to aging hipsters and just about everybody in between. The band has amassed a pretty wide fan base over the years.

In celebration of the recent release of their Monuments and Melodies greatest-hits CD, Incubus rolled out their most popular songs last night. While deep-track fans may have been a bit disappointed by the safe set list, most of the audience loved it.

Frontman Brandon Boyd has lost none of his sinewy sexiness over the years. He downplays much of this appeal, but it certainly wasn't lost on the crowd. With music that spans and merges genres, Incubus intricately traversed the realms of funk, soul, jam-band and alternative.

An amped-up version of “Megalomaniac” got the crowd pumped, as Boyd guided the strong set (the onstage visuals also added a lot). A thoughtful version of “Nice to Know You” easily flowed between Boyd's punchy vocals and some searing guitar riffs.

Incubus mixed it up throughout, with an energetic cover of Prince’s “Let’s Go Crazy” thrown in for good party measure. A somewhat meandering encore couldn't compare to the regular set. But at least most fans went home happy, hearing what they came to hear. —Lois Elswick