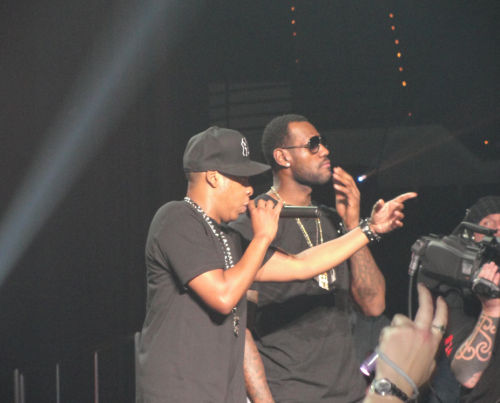 I will say the same thing about Jay-Z's concert last night that I said about his performance at the LeBrom/Obama rally last year: Hova commands an arena with the aplomb and energy of rock's biggest acts of the last half-century. Dude can throw down. Springsteen, U2, whatever — Jay-Z's right there with them.

Running through a list of past hits like "Big Pimpin" — to which Jay-Z implored to get pumped to because "Big Pimpin'" is a "cultural phenomenon" — and others while hitting the high points of the Blueprint 3, Hova had all 8,000 or so in a nearly-packed Wolstein Center eating out of the palm of his hand. Backed by a full band including horns and two sets of drums, in front of a gigantic video display, Jay-Z launched into "Run This Town" and "D.O.A" to get the show started.

After Jay-Z finished "Show Me What You Got" LeBron James joined him onstage, not that LeBron was ever that far off, as he spent the entire show off to the side of Jay-Z and the band. Notably, LeBron was next to Jay-Z and mouthing the words to "Empire State of Mind," not that Cavs fans should read anything into that.

The show was tight, on-time, and professional — consummate Jay-Z. Few complaints besides the absence of "Roc Boys," but with Jay-Z's catalog, there's only so much time for so many songs, especially for a guy who, as he told the crowd sheepishly but proudly, has now sold more records than Elvis. Think about that for a second.

The encore included "Thank You," "On to the Next One," "Venus vs. Mars," "Can I get a," "Big Pimpin,''" "Hard Knock Life," "Encore" and "Young Forever." And like he always does, Jay-Z ended the night by looking around the crowd and pointing out people he noticed, showing love from front to back, floor to nose-bleed seats, for those that filled the Wolstein Center. I can tell you for sure, those people in the back had just as good a time throwing their diamonds in the air, much to Jay-Z's credit. Like I said, dude can throw down in an arena.