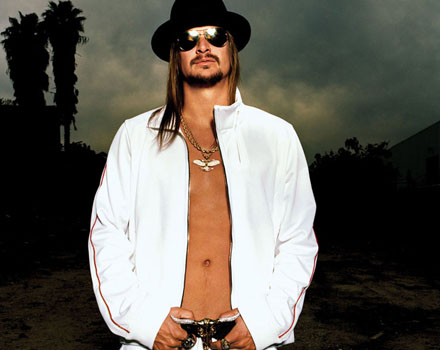 Very few tours are selling out this summer, but the Kid Rock/Lynyrd Skynyrd road show hasn't had any problems packing venues. They came to Blossom Music Center Friday night and played to a sold-out audience.

Lynyrd Skynyrd opened the night with a new song, "Skynyrd Nation," which quickly got everyone on their feet. After dedicating "Simple Man" to the troops, Johnny Van Zant asked, "How many die-hard Skynyrd fans do we have in the house tonight?" You can imagine the response.

Guitarist Rickey Medlocke stole Skynyrd's set with blistering solos. Fans mercilessly chanted "Free Bird" throughout the night. But they had to wait until the encore for the band to play their classic. A touching montage featuring all the deceased members of the band (yeah, there's a lot of them — two in the past year alone) capped their set.

Not long after, Kid Rock took the stage with an extended version of his Twisted Brown Trucker Band that included two drummers, one of which sported a long afro, white zoot suit, aviator glasses and a gong. Kid Rock tore through a set that included many of his hts, pyrotechnics and gyrating women.

With his signature hat and low-slung pants, Kid Rock ripped into "Cocky" and kept the audience enthralled for the rest of his show. Most impressive was a musical interlude, where he played every instrument, finishing by DJing while standing on top of the turntables. Hi showmanship always makes for one of the most entertaining concerts of the summer. —Lois Elswick