Concert Review: The Menzingers, Which Should Be Playing To Bigger Crowds, Put On Vital Cleveland House Of Blues Show

Playing its 2012 album in its entirety, the night was more than an exercise in nostalgia 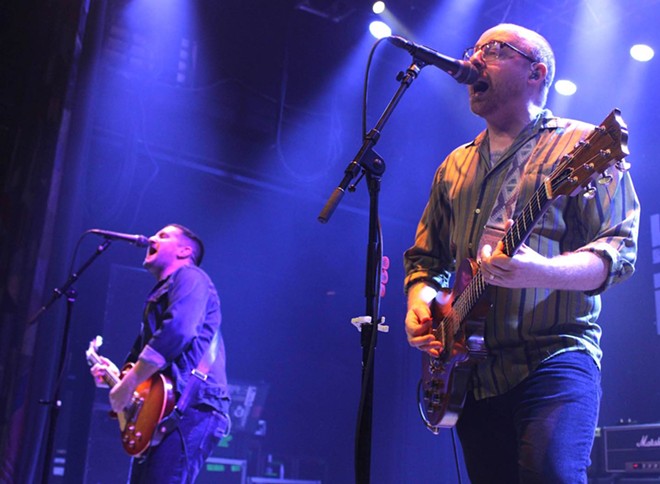 There's something about punk, like the type The Menzingers played Wednesday night in Cleveland, that allows it to weather nostalgia better than other forms of rock music.

Maybe it’s the demands placed on the musicians to play loud, fast, accurately and passionately, all at once. Maybe it’s the fans who scream along to every word.

Or maybe I’m overgeneralizing. Maybe the Scranton/Philadelphia quartet is just a solid band with songs that still feel fresh and haven’t reached enough ears. It’s not that the band’s gig at the House of Blues was empty; it’s that The Menzingers deserve to play to larger crowds.

Led by guitarists/singers Greg Barnett and Tom May, the band’s 20-song, 70-minute gig was one of the last it will play to celebrate the 10th anniversary of its third album, On the Impossible Past . (The record came out in 2012 but the band noted that it came in February of that year, so it still isn’t 11 years old.) It blasted through its 13 songs, from the rousing “Good Things” to the epic “Freedom Bridge,” followed by several other fan favorites from more recent albums.

The group’s energy never flagged as a diehard crowd that appeared to have aged with the band shouted along. The audience’s makeup even gave the chorus of “Tellin’ Lies” and its exclamation of “Where are we gonna go now that our twenties are over?” that much more potency.

And while the show was technically an exercise in nostalgia, the band was luckily able to avoid the pitfalls of such tours. This is not a band bereft of musical ideas. Rather, it is one that wanted another shot at giving a masterful album the due it deserves. In that respect, The Menzingers succeeded.

It’s just a shame that the band can’t fill a place larger than the House of Blues in Cleveland, but it’s not for lack of trying. The band has put in its time and then some. The quartet of road dogs has been in the city three times in the past year, including a performance of the same album at a Punk in Drublic Craft Beer & Music Festival stop at Jacobs Pavilion in July.

Here’s to hoping that hard work pays off in the future, though, and that The Menzingers can pack more in when it inevitably celebrates the 20th anniversary of On the Impossible Past.

If Wednesday’s concert is any indication, that performance will be just as vital.

Openers Rodeo Boys and Oso Oso put on energetic sets to warm the crowd up, with the former serving up flashy '90s alt-rock inspired tunes and the latter taking the audience through a dreamier haze. While both lacked the songwriting chops on display during the headliners’ set, Oso Oso showed it wasn’t far behind The Menzingers in that regard.